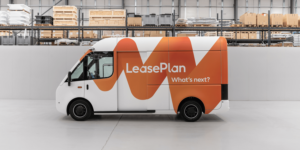 The leasing company LeasePlan wants to commission the British electric vehicle developer Arrival to build 3,000 electric transporters. The corresponding sales contract is to be concluded before the end of the third quarter of 2021. Series production of the Arrival transporter is to start in Q3/2022.

The procurement of the 3,000 battery-electric vans from Arrival is to be embedded in a partnership under which LeasePlan will be declared the “preferred operating leasing partner for Arrival’s electric vans.”

LeasePlan is a founding member of the EV100 initiative and has thus committed itself to the goal of achieving a net-zero emissions vehicle fleet by 2030. For the initiative’s member companies, this generally applies to their own company fleet, but in LeasePlan’s case it applies to the fleet financed by the company. The group manages around 1.9 million vehicles in more than 30 countries worldwide.

“I am delighted to partner with Arrival, through which LeasePlan will deliver some of the greenest, cleanest and truly innovative eLCVs to our customers,” expressed Tex Gunning, CEO of LeasePlan. “Demand for online shopping is growing rapidly, but that demand must be met responsibly and concerns about pollution from delivery vehicles must be addressed. Together, we will revolutionize the fast-growing eLCV market and make zero-emission deliveries part of the new normal.”

Arrival President Avinash Rugoobur sees the collaboration as proof, among other things, that “This shows Arrival’s method is truly game-changing and can roll out in multiple locations rapidly.” With this new partnership, he said, they will be able to expand Arrival’s footprint globally.

So far, however, Arrival has not yet entered the market with its vehicles. Founded in 2015 and headquartered in London, U.K., and Charlotte, North Carolina, U.S., Arrival showed off the latest version of its e-transporter in March and announced plans to send it into test use with customers starting this summer. The BEV van is to be launched in length variants ranging from 5.1 to 6.5 meters, has a payload of 1,975 kg and a cargo volume of 2.4 cubic meters per meter of cargo space length. The modular battery pack is said to offer capacities between 44 kWh and 133 kWh.

The electric van is to be offered at a purchase price comparable to internal combustion vehicles, and a “new standard” for commercial vehicles is also to be achieved in terms of total cost of ownership (TCO), Arrival said in March. Series production is scheduled to start in the third quarter of 2022.

The first examples of Arrival vans will probably not yet go to LeasePlan, but first to UPS. The US logistics company had already ordered 10,000 vehicles from Arrival at the beginning of 2020.

Shortly after the delivery van in the summer, Arrival’s first electric bus is to go into test operation in autumn this year – with the operator First Bus in the United Kingdom.