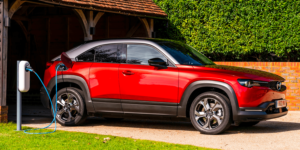 Mazda is apparently backing away from the plan to soon follow its first purely electric MX-30 series model with another variant with a Wankel engine as a range extender. Although the manufacturer confirms that the range extender will not be coming soon, it is officially sticking to the project.

According to Japanese media reports, Mazda has cancelled the Wankel range extender altogether because it requires a larger battery and would make the vehicle too expensive. Mazda had designed the MX-30, which is based on the platform of the CX-30 combustion engine model, in such a way that a small combustion engine can be installed as a range extender in the front engine compartment in addition to the 107 kW electric motor. At the presentation, it was said that such a model would follow later – the first half of 2022 was targeted.

According to a Mazda spokesperson from the Japanese headquarters, the company is still considering the use of a rotary engine as a range extender. However, it is now uncertain when exactly this model will be launched.

With the MX-30, Mazda is pursuing the concept of “rightsizing”: the battery should only be large enough to allow customers to make all their usual journeys, but not to the resource consumption of large SUV batteries – Mazda sees its concept as the more sustainable solution. The MX-30 comes with a WLTP range of 200 kilometres with its 35.5 kWh battery.

Mazda is the last carmaker to stick with the Wankel or rotary piston engine. One advantage of such engines is their compact design. In use as a range extender, these advantages could have been fully exploited. However, in the past, such engines have also had high oil consumption and not the best values for pollutant emissions.

According to the reports, Mazda will continue to use the Wankel engine, but in vehicles with a serial plug-in hybrid. There, the more expensive Wankel engine could be combined with a smaller battery, which should keep the cost of the entire vehicle at a competitive level.

In addition to the PHEVs, Mazda is developing an all-electric platform called “Skyactiv EV Scalable Architecture“. BEVs of different body styles in several segments are to be built on this platform from 2025. Mazda estimates that the BEV share of sales will be 25 per cent by 2030.