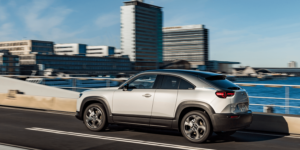 Mazda has now revealed the full UK range and pricing for the brand’s first EV with the MX-30 electric crossover. To kick-off, the order books are now open for the MX-30 First Edition model, which is limited to 500 units with deliveries starting in March 2021.

The first opportunity to order and take delivery comes with prices starting the £27,495 (including PiCG grant) for the MX-30 First Edition. Without the £3000 government grant, these prices equate £30,495 or 31,030 euros.

Mazda officially unveiled its first battery-electric model in October last year, revealing the electric car’s performance data. Briefly, these encompass an AC synchronous electric motor and a 35.5kWh lithium-ion battery. The electric car has a range of approximately 124 miles (about 200 km) and comes with AC charging up to 6.6kW and DC rapid charging designed to meet CCS standards at 50kW.

The battery size has been kept deliberately small. According to the company, it reflects driving behaviour, and they believe the MX-30 to serve as second car in most households.

It can definitely help to keep prices competitive. The 500 First Edition MX-30s will be the debut cars to arrive in the UK with deliveries starting in March 2021. This will be followed by the now announced full range including the Mazda MX-30 SE-L Lux with prices starting at £25,545, the MX-30 Sport Lux that starts at £27,545 and the range-topping GT Sport Tech start at £29,845, keeping in mind that all of these prices already include the OLEV plug-in grant.

Mazda is also calling the MX-30 a “driver-focused Mazda BEV” which the UK publication Autocar says will shake up the EV market since it shuns typical characteristics, such as silent motoring and one-pedal driving usually found in electric cars. In Mazda’s view, this makes it a car for drivers who “don’t want to sacrifice driving pleasure” when buying an electric car. One can hardly help to think “ludicrous”, but it is the company’s first array into all-electric terrain.

For driving behaviour, Mazda says they opted for less regenerative braking without the one-pedal driving style to achieve a more progressive acceleration. They also wanted to stay close to what many drivers are used to. There is also an artificial sound that is intended to imitate the noise variations heard in an internal-combustion-engined car as torque is applied. Still, Mazda is thinking to offer a silent option as well.

Mazda had announced the production of their first fully electric vehicle in May when manufacturing started at its plant in Ujina, Japan.

Following the launch of the electric MX-30, a range-extender variant will be added to the model line-up, powered by Mazda’s famed rotary engine. The Japanese firm’s range hasn’t featured a rotary-engined road car since the RX-8 went out of production in 2012, but it has since remained interested in reintroducing the technology to production.

Update 1 November 2020: Mazda UK has announced that all customers placing an order for the First Edition trim of its battery-electric compact SUV MX-30 registered by 31 March 2021 will receive the offer of a free home wall box charger with standard installation. The home-charger wall box and installation will be provided by Mazda’s charging infrastructure partner NewMotion.

Ford will make EVs in Canada from 2024 onwards