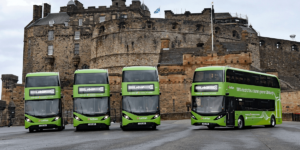 The Scottish Government has announced £50m of additional funding for zero-emission buses. This is the first phase of a fund called the Zero Emission Bus Challenge Fund (ScotZEB).

The new funding pot replaces previous funding initiatives and is designed to encourage the market to devise new and innovative ways to finance zero-emission buses.

The fund is driven by the Scottish Government’s goal to decarbonise the bus fleet. ScotZEB brings together leaders from the energy, bus and finance sectors to “co-design a pathway to a fully decarbonised bus fleet,” the Scottish government states.

Transport Minister Graeme Dey said: “The Scottish Government has come to the table with an evolved offer for zero-emission bus funding – building on the experience of previous schemes and designed in a way that maximises opportunities to attract sustainable financing and encourage innovative ways of doing so.”

Scotland has been quite active in decarbonising bus fleets. In 2018, the Scottish government invested 15 million pounds (16.6 million euros)  into the set up of 1,500 new charging locations, and a subsidy of 1.7 million pounds (1.9 million euros) to support the acquisition of more than 100 new “green” buses. The city of Aberdeen has been a forerunner in the operation of zero-emission buses and most notably hydrogen fuel cell buses.

In April this year, UK electric bus partners BYD and Scottish bus maker Alexander Dennis Limited (ADL) received another major order from Scotland. The operator First Bus has ordered 126 electric buses for use in Glasgow. The 91 double-decker and 35 single-deck buses are to operate in Glasgow from March 2023. ADL just announced its next generation of hydrogen fuel cell buses in April this year and of course, welcomes the new funding initiative.

President & Managing Director of bus manufacturer Alexander Dennis said: “The Scottish Government continues to lead the way in funding cleaner, greener buses. We look forward to working with bus operators and the energy and finance sectors to ensure the benefits of this funding are felt across communities in Scotland. Its investment in local supply chains such as our production of electric and hydrogen buses in Falkirk will underpin Scottish skilled jobs and apprenticeships that are vital for the transition to Net Zero.”

Exact details on the funding guidelines and interface will be published on the government website before the end of this month.