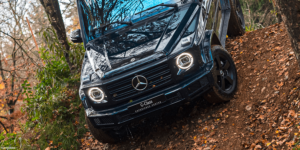 The news was broken by the blog mbpassion writes without citing any further sources. It is expected that Mercedes will offer the EQG in different performance variants and battery sizes. The more powerful version should offer “over 500 hp”, the equivalent of 368 kW. Mercedes offers the flagship sedan EQS with up to 385 kW.

The electric all-wheel drive is probably not the only thing the EQG and EQS have in common: The battery is said to be the 108 kWh power storage unit from the EQS 580. This is said to fit “well into the ladder frame construction”. The battery with a usable 107.8 kWh is assembled by Daimler at the Hedelfingen plant, but the cells with NCM811 technology are bought in.

Despite the weight and aerodynamics of the G-Class, a range of “around 500 kilometres” should be possible. The EQS with very low air resistance comes to 770 kilometres according to WLTP.

According to the report, an EQG Concept will be shown at the IAA Mobility, i.e. a near-series preview of an upcoming model. mbpassion expects the EQG to go on sale in “2022/2023”.

Should Mercedes decide on a production version of the EQG, the Stuttgart-based company would then potentially have three all-electric SUVs on offer, which are positioned above the current EQC. Mercedes had already confirmed in October 2020 that both the EQS and the smaller electric sedan EQE would receive SUV offshoots as E-Class counterparts. The four models – i.e. the two sedans and the two SUVs – are based on the Electric Vehicle Architecture (EVA) introduced in the EQS. The EQG would thus be a stand-alone model, albeit with some similarities to the EVA models.

Volvo C40 Recharge to launch in the US this year