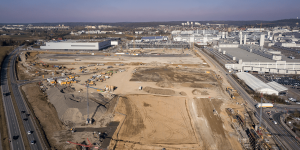 Mercedes-Benz has announced an expansion of their battery offensive for the near future. In particular, the locations in Singelfingen and Untertürkheim will receive the newest facilities in Mercedes’ global battery production network.

In Sindelfingen, Mercedes laid the cornerstone for expansion in February, stating that the new assembly hall, named Factory 56, would be the most “modern facility in the world”. Starting in 2020, Mercedes is planning on manufacturing EVs for the upper and luxury classes, as well as autonomous taxis. This includes the newest S-Class generation, as well as the planned EQ vehicles.

The Untertürkheim location will be the second battery factory owned by the company, next to Daimler’s Kamenz battery production location. In terms of battery production planning, the company now has one factory built, with five more locations planned on three continents. In Kamenz, battery packets have been in production since 2012, while a second factory is being constructed nearby. The cooperation with the Chinese partner BAIC will also produce a factory in Beijing, while Mercedes is planning on additionally upgrading their factories in Tuscaloosa, USA and Bangkok, Thailand.

Nissan and Honda to build hybrids and batteries in Thailand