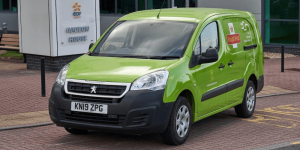 Seven UK companies have joined forces to form the Electric Vehicle Fleet Accelerator (EVFA) and have pledged to convert their fleets to electric vehicles by 2030. In return, they are demanding a range of measures from the government to help with the transition.

The seven companies include BP, BT, Direct Line Group, Royal Mail, ScottishPower, Severn Trent and Tesco, whose collective fleets count around 70,000 vehicles. The group has named themselves the ‘Electric Vehicle Fleet Accelerator’ (EVFA). The group grew out of Prime Minister Boris Johnson’s ‘Build Back Better Business Council’, which the organizers say “brings together CEOs of companies that own and operate some of the largest van fleets in the UK and companies involved with infrastructure, EV charging, retail and insurance and repair”.

The subsidy measures the companies have asked for are also designed to strengthen the burgeoning UK electric vehicle market, the companies say. Procurement of the electric delivery vans would be done locally, and the group’s recommendations would entail the government making a private sector investment of £50 billion in infrastructure and fleets over next five years, which would certainly help strengthen the local market. This would include “future-proofing” the grid and introducing charging standards, next to the expansion of public charging infrastructure.

“I wholeheartedly welcome this commitment by leading employers to fully electrify their van fleets by 2030. This announcement will be a major boost to British vehicle production,” said Prime Minister Boris Johnson, “The government is committed to providing the electric charging points and other infrastructure the UK needs as we build back greener.”

Ofgem CEO Jonathan Brearley added that the infrastructure investments were particularly important, as it would give both industry and private citizens the reliability of mobility to fully commit to electrification: “The rapid take up of electric vehicles will be vital if Britain is to hit its climate change targets. We are already accelerating investment in the energy networks that support a step change in charge points. We are reducing costs for installing new charging stations and building a market that will make sure that cars can charge at the cheapest possible time.”