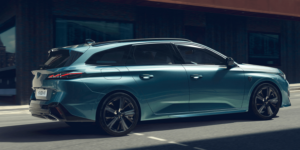 The first hybrid Peugeot 308 is now available to order in the UK, with two different hybrid powertrains available upon launch. Deliveries of the PHEV are expected in early 2022. Prices start at £34,200.

For the two variants available from launch, customers have a choice between two plug-in hybrid powertrains a hybrid 180 e-EAT8 or the more powerful, HYBRID 225 e-EAT8, with both vehicles powered by a 12.4kWh electric battery and a 1.6-litre petrol engine. Both models are capable of up to 39 miles in electric mode according to WLTP. The two versions were also announced at the initial presentation in June. Two hybrids were also announced for the basic 308 model, and were likely adapted for the SW version.

Both plug-in hybrid variants include a 3.7kW on-board charger as standard equipment, with the option to add a faster 7.4kW available for customers. Fully charging the battery with the standard 3.7kW cable takes 3 hours and 55 minutes, down to 1 hour and 55 minutes when using the faster 7.4kW charger.

Prices range from the above-mentioned £34,200 for the Allure trim, going up to £40,000 for the GT premium. There is also a hybrid model available in the Allure Premium and GT trim levels, (prices starting at £35,100 and £37,000, respectively), however it is unclear whether a hybrid variant will be released in the cheaper Active Premium trim, which is currently only available with combustion models.

Hybrid models are not the end of the road for this vehicle model, however, as Peugeot announced that their lineup will include electric variants by 2025.

“The new 308 SW is the latest PEUGEOT model to give buyers the ability to choose the powertrain that best suits them. By 2025, our entire model line-up will feature an electrified variant,” added Julie David, Managing Director, Peugeot UK: “With a practical and bold design, as well a class-leading levels of technology, the new 308 SW offers buyers a unique and standout proposition in the compact estate segment.”