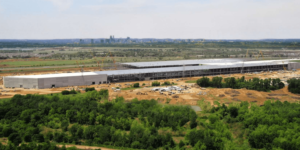 Tesla could start test production of the Model Y in Texas as early as next week – and regular production before the end of the year, according to observers. New rumours are also circulating about the upcoming entry-level model, which has so far been referred to as the Model 2.

The information about the possible test production comes from drone pilot Joe Tegtmeyer, who regularly films Giga Texas. Tegtmeyer is said to have learned on-site from an unnamed source that the first production line for the Model Y in the half-finished factory is already complete. This indicates that Tesla could start test production, train the workers and set up the machines from next week onwards. The vehicles produced in this way would be ready for operation, but may not be registered.

What is still unclear is whether Tesla will actually start test production in the near future – but with the production line fully erected, they have the opportunity to do so.

However, the “backup plan” with the 2170 cells could still be used for the test production – and possibly for series production starting in two or three months. It is unclear whether Tesla will have sufficient quantities of 4680 cells for the structural battery packs by then. As a backup, Tesla is preparing for Texas and the Gigafactory in Grünheide to produce the Model Y with conventional battery packs and 2170 round cells.

One difference between the Model Ys built in California and those from Texas (and later at Giga Berlin in Grünheide) beyond the battery is already clear: While the Model Y built in Fremont only has a cast rear frame (sometimes called mega-cast), the factories in Texas and Brandenburg are said to use their giga-presses to also produce the front frames from a single cast. Elon Musk confirmed this during the presentation of the Q2 figures.

What Musk has not yet confirmed is a rumour that comes from China: that Tesla has completed the prototype for its planned new entry-level model. Test production is planned for the end of 2021 and the supply chain is being set up. The information comes from the well-informed Twitter user @Ray4Tesla.

In the USA, Tesla could apply for subsidies from the US government for the expansion of its charging network, according to information from Teslarati. The infrastructure plan provides 7.5 billion dollars for the expansion of charging infrastructure. The prerequisite for the funding would be that Tesla opens its Superchargers to all-electric car brands – or actually implements the announced opening. Teslarati even speculates that the subsidy is one of the reasons why Tesla wants to open its charging network now.

Tesla, on the other hand, has suffered a setback in India: A few weeks ago, the carmaker had appealed to the government there to lower import duties for electric cars. Tesla had founded a subsidiary in Bangalore at the beginning of the year and wants to start sales in India this year – the fact that this did not happen earlier is partly due to the high import duties, which almost double the price of the Model 3. Now the new Minister of Power and Heavy Industries, Krishan Pal Gurjar, has stated that “no such proposal is under consideration” in his ministry. So the only way Tesla can probably get around import duties in India is by setting up a manufacturing facility – whether a full vehicle production line or an SKD or CKD assembly line – on the subcontinent.

Togg aims for serial production by 2022