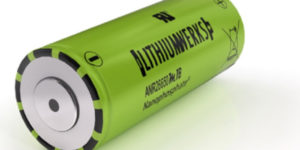 Lithium Werks wants to build North America’s largest plant for the production of cathode powder and electrodes for lithium batteries. In addition to LFP cathode powder, the factory will also produce nanophosphate powder developed by MIT and finished electrodes for battery cell manufacturers.

The plant is expected to have an annual production capacity of 4 GWh of cathode powder at the start – and a corresponding amount of finished electrodes. Site selection for the plant is underway and is expected to be completed by the fourth quarter of 2021, according to Lithium Werks.

The Texas-based company says the plans for the plant are in response to the urgent national need for lithium battery capacity in the US. For this reason, the plant will also be designed for rapid expansion. The goal is to “meet the ever-increasing demand for safe, cost-effective and environmentally friendly active materials for electric vehicles, light transportation and energy storage applications”.

With regard to the production processes, the company gives only superficial details. For example, it says it will use a “newly developed, proprietary and innovative process that is non-toxic and far more environmentally friendly than the widely used NMP solvent process”. The plant will also rely on processes that eliminate production steps, which should result in lower inventory and costs, he said. And: Lithium Werks aims to use new binders, special polymers, material blends and nanocrystalline materials, including a nanophosphate powder developed by MIT.

Lithium Werks is still a fairly young player in the market: the company was founded in 2017 and specialises in lithium iron phosphate materials, cells, modules and battery management systems. In 2018, Lithium Werks bought a production facility in the Chinese city of Changzhou from A123 Systems, which was also active in the battery market at the time. In addition, as part of the transaction, the Americans acquired A123’s customer base in China, Europe and the United States, as well as its employees, product design and product process. At the time, A123 stated that it wanted to focus on the automotive market in the future and score points with applications for electric cars.