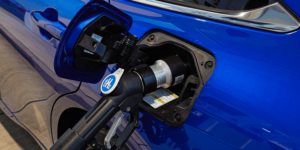 With a Hydrogen Strategy document, the UK government has revealed plans to kick-start a “hydrogen revolution” in the UK, with the aim of replacing fossil fuels in sectors such as transport and heavy industry. A £240m fund will be used to help support the growth of such an industry.

Within the Hydrogen Strategy, the government has earmarked £23 million for the Hydrogen for Transport Programme. For the transport sector in the UK, the government sees hydrogen technology as complementing electrification across modes of transport such as buses, trains, and heavy goods vehicles (HGVs). The strategy document also states that hydrogen is likely to provide solutions for sectors that will not be able to fully decarbonise otherwise, including aviation and shipping.

For the more immediate future, this appears to be directed at hydrogen fuel cell buses that are already being manufactured in the UK and are in operation. In its policy document, the government says it expects hydrogen vehicles, “particularly depot-based transport including buses, to constitute the bulk of 2020s hydrogen demand from the mobility sector”.

By 2030, the government sees a wider application of hydrogen vehicles, across a “range of transport modes, including HGVs, buses, and rail, along with early-stage uses in commercial shipping and aviation”. The policy documents states that hydrogen use for decarbonising shipping and aviation “could become a large component of the overall hydrogen demand in the long term.”

The government identifies key challenges as being “technology uncertainty”, but did not elaborate on what this means, a lack of existing hydrogen infrastructure and cost differentials. This should be addressed with continued investment in research and innovation by both government and industry.

For the British rail system, the government sees the primary roles with battery-electric trains, while “there will also be a role for new traction technologies, like battery and hydrogen trains, on some lines where they make economic and operational sense.”

Investments will be made with up to £20 million this financial year in designing trials for hydrogen fuel cell HGVs “to establish the feasibility, deliverability, costs and benefits of these technologies in the UK.”

For shipping, the UK governments Hydrogen Strategy policy document points out that in March this year, they launched the £20 million Clean Maritime Demonstration Competition, which aims to accelerate the design and development of zero-emission vessels in the UK which they say will lay the foundations for a network of technology demonstrations, fast-tracking maritime decarbonisation. The UK government is also “exploring the establishment” of a UK Shipping Office for Reducing Emissions (UK-SHORE) as a dedicated unit within the Department of Transport with the sole focus of decarbonising the maritime sector. Here it seems there are bold plans. According to the Hydrogen Strategy document, “UK-SHORE aims to transform the UK into a global leader in the design and manufacturing of clean maritime technologies and fuels such as hydrogen and ammonia.”

Initiators in the government estimate that the “hydrogen economy could be worth £900 million and support 9000 jobs, potentially rising to £13 billion and 100,000 jobs by 2050”. This would be coupled with 20-35% of the UK’s energy consumption going for a hydrogen basis by 2050. This new energy source could be critical to meet the UK’s targets of net zero emissions by 2050 and could contribute significantly to cutting emissions by 78% by 2035.

In addition to working closely with industry and providing subsidies and grants, a consultation is to take place on a £240m Net Zero Hydrogen Fund to support the commercial deployment of hydrogen production plants in the UK, as well as £105m of previously earmarked funding for trials of low-carbon fuel and efficiency solutions. £40 million will go to a ‘Red Diesel Replacement Competition’, aiming to find a solution to deal with the 14 million tonnes of carbon each year from red diesel.

Chief Executive at SSE Alistair Phillips-Davies said that the government’s Hydrogen Strategy includes “…working with Equinor on the world’s first major hydrogen-fired power station at Keadby and developing hydrogen storage caverns at Aldbrough, as well as our partnership with Siemens Gamesa to co-locate hydrogen production facilities at our wind farms. The strategy is a welcome first step to realising the potential of hydrogen.”

With reporting by Carrie Hampel