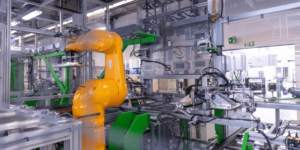 German companies Proton Motor Fuel Cell GmbH and Aumann AG have concluded an agreement for the series production of hydrogen fuel cells. In essence, Proton will continue to use a production facility that was created with the special machinery manufacturer Aumann as part of a research project.

The plant was developed by both companies within the framework of the EU programme ‘Fit-4-AMandA’ (Fit for Automatic Manufacturing and Assembly). According to Proton, it has now been agreed that Aumann will exclusively carry out the conversion of the Fit-4-AMandA machine prototype into an automatic fuel cell stack manufacturing system for series production at Proton Motor for the next four years after the end of the funding project.

The so-called “stack robot” is expected to increase the annual production capacity to up to 2,500 fuel cell units. Proton Motor says it embeds graphite bipolar plate stacks as the core of a module for its fuel cell system. Proton Motor’s fuel cells are used in commercial vehicles, among other applications, and the company says it has recently received follow-on orders to equip refuse collection vehicles with hydrogen fuel cells.

“After the successful use of our first plant for Proton Motor, we are very pleased to continue our collaboration with Proton Motor and thus continue to advance the hydrogen fuel cell as a future-oriented technology for mobility,” said Sebastian Goldner, CTO & COO at Proton Motor. “With Aumann, we have a strong partner at our side to realise the series production of our fuel cell stacks with their know-how for special machines.”