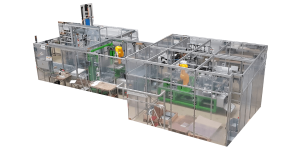 Proton Motor Fuel Cell has purchased a new fuel cell stack machine that can increase production capacity to up to 5,000 fuel cell units per year.

With four other companies, Proton Motor has been involved in the development and rigorous testing program of the robot to improve performance and capacity of the machine. The result seems to have convinced management to purchase such a robot.

In order to meet the growing demand in the coming years, Proton Motor Fuel Cell, together with the manufacturer, has also drawn up plans for optional production expansion. With a slightly different machine layout, production can be expanded to up to 30,000 stack units per year.

The “Gen4” stack module of the modular and standardized hydrogen fuel cell will cover the expected demand. This is to be provided for buses, trucks and ships, among other things.

The manufacturing robot was implemented as part of the Fit-4-AMandA (Fit for Automatic Manufacturing and Assembly) project and financed by the European agency FCH JU (Fuel Cells and Hydrogen Joint Undertaking).