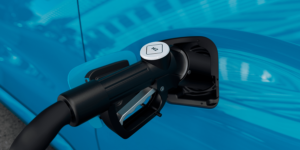 Symbio did not provide further details about the US subsidiary, such as the location of the headquarters, the number of employees or the budget with which the subsidiary will be equipped. The announcement was made in the course of Symbio’s appearance at the ACT Expo 2021 (Advanced Clean Transportation) in Las Vegas.

According to the statement, Symbio also wants to offer its ‘H2Motiv e’ portfolio in the United States, i.e. fuel cell solutions in the power range from 40 to 300 kW. According to the announcement, Symbio North America will focus on light, medium and heavy-duty commercial vehicles. The aim is to offer US vehicle manufacturers and fleet partners “tailored hydrogen solutions”.

At the ACT Expo, Symbio exhibited the 150 kW variant of its fuel cell product, which is said to be particularly suitable for pickups and other commercial vehicles. The company says that light commercial vehicles with Symbio fuel cells have already covered more than four million kilometres in real-world use.

Symbio was officially launched in November 2019 by Michelin and Faurecia. Its partners include the Stellantis Group: the announced fuel cell versions of the Opel Vivaro-e and its sister models use stacks from Syymbio.