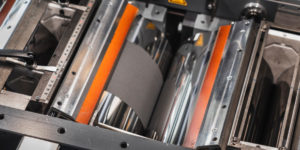 The approach developed by an interdisciplinary research team at the Fraunhofer IWS in Dresden starts with the production of the electrodes, which are the central component of the battery and usually consist of a metal foil covered with a thin coating. The coating contains the active components that are responsible for energy storage.

“The conventional coating process uses a wet chemical method that applies what is known as slurry,” explains Benjamin Schumm, group leader of chemical coating processes at the Fraunhofer IWS. A kind of paste is produced from active material, conductive blacks and binders together with a solvent, which is first used to create a wet layer on the metal foil. “Extremely large machines with very long drying tracks are needed to ensure that the solvent will evaporate afterward. With DRYtraec, we can design this process more efficiently.”

Compared to conventional production methods, the new process called DRYtraec should therefore not only be more sustainable, but also save space and energy. For the coating process now developed, basically similar starting materials are used as in the slurry approaches. However, the dry version of the Fraunhofer IWS does not use solvents, but instead relies on a special binder. Together, the materials form a powder that is placed in a calender gap, i.e. a gap between two rollers rotating in opposite directions.

The decisive factor is that one of the rollers rotates faster than the other. This creates a shear force that ensures that the binder forms thread-like networks, so-called fibrils. “Imagine it as a spider’s web that mechanically embeds the particles,” says Schumm. A fine film is formed on the faster rotating roller through pressure and movement. This is then transferred to a current-conducting film in a second calender gap. According to the institute, both sides can be coated at the same time without much extra effort. In the last step, the resulting roll is then cut to size as needed and the individual parts are stacked accordingly to produce the finished battery cell.

The team has already put the first prototype systems into operation as part of the DryProTex funding project. This has shown that continuous electrode production is possible – also independent of the respective battery type: “The range of possible uses for the technology is not limited to a particular cell chemistry,” emphasises Schumm. “It could equally be used on lithium-ion cells as on lithium-sulfur or sodium-ion cells. We are even looking at solid-state batteries. These will be increasingly important in the future, but the materials cannot tolerate wet chemical processing. Thus, DRYtraec allows us to offer a very promising solution to this problem.”

According to the institute, there is great interest from industry. Talks are currently underway with several car and cell manufacturers to plan the realisation of various pilot plants, it says.

Meanwhile, several players are working on dry coating processes for battery electrodes, both nationally and internationally. This field is also the subject of the ProZell competence cluster funded by the Federal Ministry of Education and Research. In the USA, the company Maxwell Technologies, which was taken over by Tesla, is working on “dry electrodes”.

The DRYtraec coating process developed at the Fraunhofer Institute for Material and Beam Technology IWS allows the dry production of battery electrodes without toxic organic solvents or water. The German Federal Ministry of Education and Research (BMBF) is now funding a project with 3.7 million euros that will expand the dry coating technology into a holistic technology platform.

Several prototypes of the DRYtraec-based coating systems have already been developed by the IWS Fraunhofer researchers, in cooperation with industry partners. The process involves coating electrodes for lithium-ion, solid-state or lithium-sulfur batteries continuously and scalable in a roll-to-roll process. The performance of the electrodes is comparable to conventionally produced electrodes in the so-called ‘slurry process’ and, in some respects, even exceeds them. So far, the scientists have focused on the development of efficient coating processes. However, they concede that upstream and downstream processes or accompanying analytics are often still realized in time-consuming and discontinuous procedures.

SK Innovation to build a new battery plant in China