With the rollout Down Under, the all-electric light-duty truck is now running in the fourth major region, following Japan, Europe, and the US. The Fuso eCanter is the child of Daimler Trucks and its Mitsubishi subsidiary. Daimler Truck and Bus President and CEO Daniel Whitehead commented Australia Post was the perfect first Australian customer for the eCanter.

For Australia Post, the new trucks add to existing electrification efforts, however tentative. James Dixon, General Manager, Networks for Australia Post, said the eCanter trucks would contribute to the company’s target to reduce emissions by 15% by 2025 from an FY19 baseline.

Compare this to DHL’s goal of running 60 per cent of vehicles electrically by 2030, at least for inner-city logistics. Effectively the Group aims to operate more than 80,000 electric vehicles within ten years. In 2020, EVs made up 18 per cent of the fleet.

Australia Post, at the same time, has been making some advances, recently adding one thousand electric trikes made in Switzerland.

For the incoming Fuso eCanter, the mail service says the EVs will operate across the Australia Post and StarTrack businesses in major capitals in two body configurations supported by the Daimler Trucks network.

The Fuso eCanter for Australia is shipped from Tramagal in Portugal and comes with the same standard specifications as the models currently available in Japan and Europe.

The light truck debuted in 2017 and has since been in operation at customers such as UPS, Yamato, 7-Eleven, DPD, Wincanton and Hovis, and DHL, DB Schenker, Rhenus, Dachser and P&H Logistik. Test runs are currently underway at PostNL, Albert Heijn, the Cornelissen Groep, Technische Unie and Bidfood, and by the city administration of Lisbon.

The Fuso light truck has a range of around 100 kilometres provided through six lithium-ion battery modules, each with 13.8 kWh (total: 82.8 kWh). The payload is up to 4.5 tons. Daimler states the total weight at 7.49 tons. As with all vehicles in this weight class, the maximum speed is limited to 80 km/h. 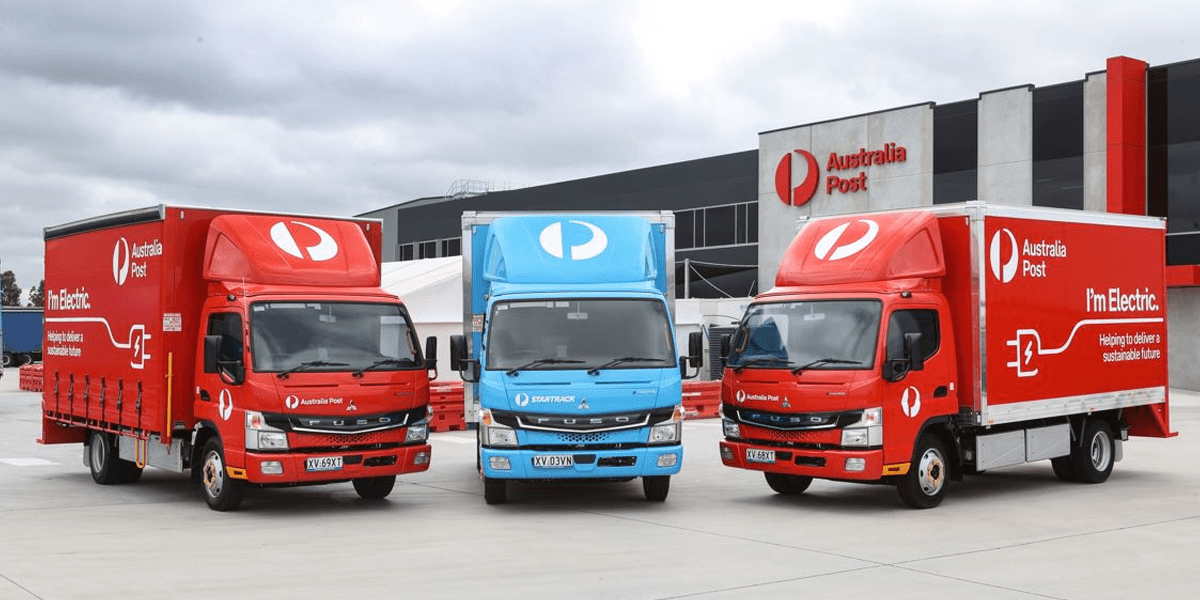 Daniel Whitehead, the President and CEO of Daimler Truck and Bus Australia Pacific, which represents the Fuso, Freightliner and Mercedes-Benz brands, said Australia Post was the perfect first Australian customer for the eCanter: “Daimler is thrilled to partner with such an iconic brand as Australia Post on a journey towards carbon-neutral freight transportation in Australia,” he said.

The remaining 17 eCanters of the 20-vehicle order should arrive in early 2022 to deliver post in Australia’s major capital cities.