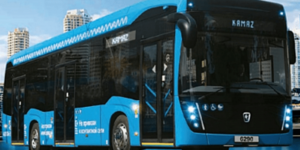 The presentation took place at the ‘Comtrans 2021’ trade fair in Moscow. The Kamaz 6290 is a solo bus with a length of 12.4 metres, which offers space for 80 passengers (33 of them on seats). It is based on the 6282 electric bus, which is in regular service in Moscow, for example.

Its big distinguishing feature from the well-known battery buses from Kamaz is the energy storage. Six cylindrical pressure tanks are mounted on the roof of the vehicle, but their maximum storage capacity is not specified. The range of the 6290 is said to be up to 250 kilometres, which, according to Kamaz, makes the bus suitable for intercity transport.

The bus has ZF axles, the rear one is an ‘AxTrax’, in which the electric drive is integrated. Kamaz does not give any information about the power of the AxTrax in the press release. The fuel cell is supposed to have an output of 45 kW, but there is no further information on this, nor on the buffer battery. The bus will be able to operate in temperatures ranging from -40 to +40 degrees.

The chassis and body of the vehicle on display in Moscow were manufactured by the Kamaz subsidiary Nefaz in Bashkortostan, a republic with sovereign rights in the eastern part of European Russia. The propulsion system and hydrogen components were then installed at Kamaz’s Research and Technology Centre.

“The world is moving forward and we cannot lag behind,” says Sergei Chemezov, CEO of Rostec, the state-owned corporation that owns Kamaz. “The hydrogen bus, or the hydrogen electric bus, is the next step in the search for alternative energy sources and in the development of modern environmentally friendly passenger transport.”

Andrei Savkinov, chief designer at Kamaz, also indicated that a prototype of the 6290 will be tested in real-world operation in Moscow next year. Moscow was chosen as the test location not only because of its focus on electric buses: “There is an autonomous hydrogen filling station only in Chernogolovka near Moscow, so we can’t test the hydrogen-electric bus elsewhere,” the chief designer said. The test runs are expected to be completed in the course of 2023.

“In case the relevant refueling infrastructure is set up and there is a demand for the new kind of eco-transport on the part of Moscow, we plan to provide for final assembly of hydrogen fuel cell buses at the Sokolniki Car Repair and Construction Plant in the capital of the country, where Kamaz electric buses are already assembled successfully,” Savkinov said. In other words, in the same plant where the battery buses are already assembled.