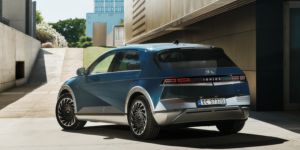 Hyundai is considering expanding its electric sub-brand Ioniq with more compact models based mainly on the E-GMP platform, along with a successor to the all-electric Kona, according to marketing chief Thomas Schemera.

The decision is not final, but models such as an Ioniq 2, 3 or 4 are considered likely. Hyundai executive Schemera says the current problem with compact battery-electric cars is that they are not yet profitable. However, he sees potential in the long run. “It would make sense to extend all the benefits associated with the E-GMP platform to smaller vehicles,” Schemera added.

Apparently, the company has taken an interest in Volkswagen’s ID. Life concept, with Schemera referring to it as a “yardstick” for Hyundai. The Life concept is to be developed into a full series model planned to arrive in 2025 and will cost around €20,000.

The first E-GMP-based Hyundai model is the Ioniq 5. With the Ioniq 6 and Ioniq 7, two further models are already confirmed for 2022 and 2024, respectively. The Ioniq 5 will be a full-size electric sedan, while the 6 and 7 will be a mid-size sedan and a large SUV.

Regarding the new Kona, when Schemera was asked in the interview whether or not a successor to the Kona Electric may bear the Ioniq 2, three or four nameplates, he stated: “That is one thing I do not wish to affirm, but it surely appears to be probably.” The main task ahead in setting up the Kona successor, which would no longer share the underpinnings of its ICE counterpart, is “creating sufficient quantity and economies of scale to fulfil revenue targets with expensive-to-produce EVs”.

In other news, Nissan too has announced to be looking to electrify the small car segment, starting in Japan as reported. The mini EV is set to launch early next year for about 15,000 euros – however, the battery will only hold 20 kWh.