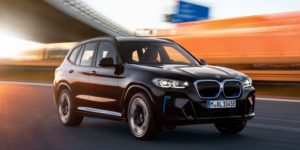 BMW has announced a series of model upgrades that also affect two electric models in the Munich-based company’s portfolio: The BMW iX3 will receive a predictive battery thermal management system from November 2021, while the BMW i3 will be offered in a limited edition as Edition Unique Forever.

First to the iX3, which has been in series production in China since 2020. The electric SUV will be equipped with an intelligent battery thermal management system from autumn onwards to maintain an improved charging curve during DC charging, regardless of operating and outside temperatures. The system works as follows: As soon as the active route guidance of the navigation system foresees a stopover at an HPC charger, the new thermal management already ensures automatic preconditioning of the battery during the approach. The system takes into account, among other things, the battery temperature, the remaining range, the predicted charging power and the planned extent of the charging process as part of the overall route calculation, BMW reports.

As reported, the iX3 will also receive a facelift in autumn. At the front, the revised model stands out primarily due to the narrower headlights and the more strikingly drawn air intakes in the lower area of the bumper. The defining (and in the case of the iX3 almost closed) BMW kidney is minimally larger. At the rear, the facelift model is easier to recognise, with the more angular rear light design standing out.

The changes to the interior are more extensive: For example, there is a new steering wheel, a larger infotainment display, the more intelligent iDrive with BMW Operating System 7, a new arrangement of the air vents and controls in the dashboard and a redesigned centre console.

However, there are no changes to the drive technology of the iX3. The 210 kW electric motor in the rear, the 80 kWh lithium-ion battery in the underbody (74 kWh of which can be used) and the maximum DC charging power of 150 kW remain. On the AC side, the three-phase 11 kW charger remains. The vehicle will continue to be manufactured by BMW Brilliance in Shenyang, China.

Autumn brings another innovation for BMW’s electric vehicle pioneer i3. The small car and its offshoot BMW i3s will be offered in a limited edition as Edition Unique Forever from November 2021. The 2,000 planned edition vehicles are to be distinguished by the particularly high-quality and exclusive design and equipment features, such as individualised exterior paintwork and a black insert for the rear bumper.

In the interior of the edition vehicles, the Suite equipment line with its leather and fine wood trim and Ambiente lighting will be supplemented by specific design elements: the front headrests will have “Unique Forever” lettering, and the door trim panels in the area of the exterior mirrors will bear the inscription “One of 2 000”.

The vehicles of the Unique Forever edition are produced at the BMW plant in Leipzig. According to the carmaker, only electricity generated by the wind turbines erected on the factory premises is used. 350 of the sustainably produced edition vehicles are available for the German automobile market.

Besides the model update, there is another reason for BMW to look forward to this November. The sales launches of the new BMW iX and BMW i4 electric cars are also scheduled for this date. BMW turned on the online configurator for the duo in mid-July. Prices for the electric sedan start at 58,300 euros (before incentives), for the larger e-SUV iX at 77,300 euros. BMW also offers pre-configured models for both series.