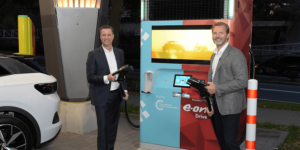 The energy group E.ON and Volkswagen have just opened the order books for their battery-supported fast charger in Germany. The E.ON Drive Booster can charge two electric cars simultaneously at 150 kW and does not require any civil engineering or grid connection adaptation.

VW presented such grid-independent charging points at the IAA back in 2017. At the beginning of 2019, VW again gave a preview of the company’s future mobile fast-charging station. The station works on the principle that by coupling the charging station with a battery, it will be possible to install fast-charging columns “almost everywhere and at significantly more attractive conditions” without civil engineering or grid connection. The German carmaking giant revealed over a year and a half ago that it is cooperating with E.ON for the rollout of the hardware.

Now things are getting underway. In Germany, the device can be ordered from E.ON with immediate effect, although there are no details on the price as yet. According to the partners, normal charging stations can also be “upgraded to a booster”. Both groups point out that the solution is therefore ideal for opening up new locations quickly and cost-effectively.

Volkswagen and E.ON have now also put the first E.ON Drive Booster into operation in the German city of Essen. As to how the model works, the partners say that the station does not draw its power directly from the grid, but has an integrated battery storage system. Volkswagen explains that a normal power connection, such as is found in every supermarket, and the internal battery together provide the power needed to charge two electric cars in parallel with up to 150 kilowatts of power.

While Volkswagen Group Components developed and produces the charging station, the energy company is responsible for marketing. According to earlier information, the duo expects particular interest from public utilities and municipalities as well as petrol stations and service stations. In addition, the offer is tailored to the electrification of retail car parks and logistics companies such as parcel services.

Patrick Lammers, responsible for customer solutions on the E.ON Board of Management says, “I am proud that with the E.ON Drive Booster we have an immediate and attractive offer for businesses and municipalities wanting to set up charging stations without spending a fortune.”

Thomas Schmall, Member of the Board of Management for Technology at Volkswagen AG and CEO of Volkswagen Group Components, adds: “We are taking the expansion of charging infrastructure into our own hands and aiming to work with strong partners to bring about a fivefold increase in the number of fast chargers in Europe by 2025. Through our collaboration with E.ON, the fast-charging stations developed and produced by Volkswagen Group Components can be put to use. They are ideally suited to support the rapid expansion of charging infrastructure since the time and costs required for installation are minimal.”

E.ON and Volkswagen have developed the business model together. However, the two corporations are not without competition: energy company Uniper, for example, recently announced its intention to provide more than 1,300 mobile fast charging points in Germany by the end of 2024 as an “infrastructure-as-a-service” offer. Several other companies have also specialised in battery-based fast chargers, such as ADS-TEC Energy and Jolt Energy.