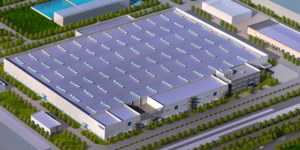 In Hefei, capital of the Chinese province of Anhui, Volkswagen operates an electric vehicle production plant together with JAC under the umbrella of the Volkswagen Anhui joint venture. The new component plant named VW Anhui Components Company for the assembly of battery systems is now to be located in the vicinity. Both plants represent important achievements for Volkswagen: Volkswagen Anhui is the first Chinese joint venture for all-electric vehicles, in which Volkswagen holds a majority stake. And with the VW Anhui Components Company, the group becomes the sole owner of a battery system plant in China for the first time.

Volkswagen Group China says it plans to invest more than €140 million in the new plant and associated facilities by 2025. Production is scheduled to start in the second half of 2023. The new component plant in Hefei is expected to increase the value-added share of Volkswagen components in the e-vehicles produced by Volkswagen Anhui in the future to approximately 40 per cent. In addition, the Wolfsburg-based company states that the new component plant will also “provide a solid basis for the production of the next battery generations for the Chinese market”.

The 45,000 square metre plant will be located in the supplier park of the production site in Hefei. Volkswagen initially estimates the number of employees at around 200. And: The new battery system plant is to work in close cooperation with the Group’s own battery plants and the plants in Braunschweig and Tianjin in China. In addition, synergies between the various MEB battery plants of Volkswagen’s Chinese joint venture are to be leveraged.

In addition to the plant in Anhui, battery manufacturing capacity is also currently being created in Mlada Boleslav in the Czech Republic and in Chattanooga in the USA. The Volkswagen Group’s goal is “to be able to produce over one million battery systems annually within a few years,” an accompanying statement said.

“Anhui is an important pillar of our global battery strategy,” expresses Thomas Schmall, Group Board Member for Technology Volkswagen AG. “The global strategy leads from vertical integration in the raw material market via building battery plants, as well as cell factories in collaboration with partners – amongst them the Chinese battery expert Gotion – to second life solutions and recycling.” MEB battery production facilities are currently being set up in Asia, Europe and the USA to meet the growing demand for MEB battery systems in the future, says Schmall. And: the lead plant in Braunschweig already produces up to 500,000 systems a year and supports the construction of further assembly capacities with its expertise in planning, development and production.