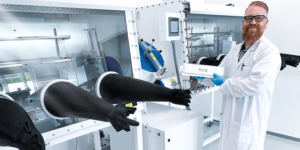 Blackstone Technology, the German subsidiary of the Swiss commodities company Blackstone Resources, has commissioned a laboratory for quality assurance and product development at its new battery cell production site in Döbeln, Germany.

According to the company, the laboratory is directly connected to the production facility, so that the development, analysis and testing of Blackstone’s pastes, electrodes and battery cells can now also take place directly at the site. “We will now adapt our product ranges to the changing requirements and developments in the dynamic market of the e-mobility and communications industry in an even shorter cycle,” says Ulrich Ernst, President and CEO of Blackstone Resources AG.

Blackstone Technology announced in February that it would start producing LFP cells in the summer. These are to be produced with an in-house patented 3D printing technology; in February, Blackstone showed a pre-series sample cell ready for series production. The energy density of the LFP cell is to be 220 Wh/kg.

Blackstone has had the official operating permit to start small-scale production in Döbeln since July. Production is to start in September after completion of the installation of the machinery and equipment and is to be ramped up quickly: from 50 MWh in the current year to an annual capacity of 500 MWh in 2022. The financing for this expansion has now been secured, Blackstone reported at the beginning of August. This is due to a further investment of 40 million euros by the parent company Blackstone Resources.