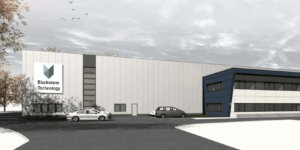 Blackstone Technology, the German subsidiary of the Swiss commodities company Blackstone Resources, wants to increase its annual production capacity at the Döbeln site tenfold – from currently 50 MWh to around 500 MWh in the coming year.

In Döbeln, Blackstone manufactures lithium-ion batteries with 3D-printed electrodes for small series. In February, the company specified that these will be batteries with LFP chemistry. In the short term, the company is mainly planning to produce pouch cells with its in-house thick layer technology; in parallel, Blackstone is working on the development of solid-state batteries and their production processes.

In addition to the expansion of production capacities in Döbeln to 500 MWh in the coming year, Blackstone also announced that it has recently signed a letter of intent with Triathlon Batterien, a German manufacturer of battery systems for industrial trucks. The agreement covers the delivery of “a significant quantity of battery cells with a potential of several 100 MWh over the total term”, Blackstone writes. In addition, there are further declarations of intent with customers from the marine applications, electric motorcycles and electric commercial vehicles and electric buses sectors with a value of approximately 184 million euros.

The German subsidiary of the Swiss raw materials group announced the Saxon city of Döbeln as its production site in October 2020. Among other things, to finance the modern production facilities on site, the manufacturer concluded a contract for a convertible loan of up to 20 million Swiss francs (around 18.5 million euros) at the beginning of the year. The company aims to differentiate itself from the competition with a patented 3D technology for printing cells based on LFP technology.

In February, Blackstone presented a pre-production sample cell that is ready for series production in Döbeln and is to be launched on the market. In terms of the energy density of this cell, the company is aiming for more than 220 Wh per kilogram. “Although LFP technology typically has a lower energy density in comparison to other battery chemistries, the Blackstone’s proprietary thick-layer technology that is used at Blackstone Technology, cancels out these disadvantages,” the company elaborated in February. “In fact, the LFP battery technology presented offers 20-25% more energy density compared to current lithium-ion battery technology.” In the current announcement, Blackstone reiterates this claim (“20% higher density”).

LFP cells alone will not be enough, according to earlier statements. Other combinations with other metals such as NMC batteries are additionally planned for production, it said in February. In addition, the printing technology allows the batteries to be manufactured in different shapes, for example specifically for electric cars, electric buses and electric motorbikes. “However, by Blackstone’s own 3D-printing technology, batteries can be manufactured in almost any shape and size, which not only gives more room for design freedom, but also helps to make optimum use of the available installation space, plus it is very economical,” Blackstone wrote.

Parent company Blackstone Resources AG had first put itself on the radar in January 2019 as a player in setting up battery cell manufacturing in this country. At the time, the Swiss firm spoke of wanting to produce 100 million battery cells per year in a first phase, enough for 25,000 to 100,000 electric car batteries. In a further phase, production was to be “greatly increased”, they said. Earlier this year, it also became public that the company is participating in a research alliance for the electrification of EU shipping. Blackstone Resources’ core business is battery metals and refinery development. In view of the increasing demand in the course of electric vehicle and battery production, the group announces in the current announcement that it will “establish, develop and operate production facilities for battery metals such as lithium, cobalt, manganese, graphite, nickel and copper in order to participate in this trend (of electromobility, editor’s note)”.

Blackstone Technology has received the official operating permit from the authorities in Döbeln to start small-scale production of 3D-printed lithium-ion battery cells. In addition, the Sächsische Aufbaubank SAB has approved funding for the investments. The subsidies are part of the so-called GRW programme (“Gemeinschaftsaufgabe Verbesserung der regionalen Wirtschaftsstruktur”, or Joint Task Improvement of the Regional Economic Structure in English). Specifically, the Sächsische Aufbaubank (Saxon Development Bank) has given Blackstone a decision on a 20 per cent subsidy for the investment expenditure. An absolute amount of funding is not specified.

Production in Döbeln will start in September 2021 after the installation of the machinery and equipment has been completed, according to an accompanying statement.

Blackstone Technology has secured financing for the announced expansion of its production facilities in Döbeln to 500 MWh per year in 2022. This is made possible by a further investment of €40 million by the parent company Blackstone Resources.

Further, the company reports a combined order value of approximately EUR 200 million, with which the expansion is justified. Blackstone’s next reported goal is the 1000 MWh-milestone for battery production and then further on to 5,000 MWh per year.

Hyundai to invest in SolidEnergy Systems