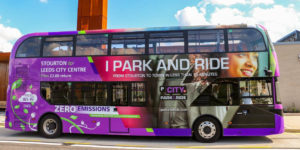 The new zero-emission double-deckers will depart Stourton every ten minutes to take users of the Park & Ride service from the site on the M621 motorway into Leeds city centre. This will take them less than 15 minutes. The Stourton site is the first solar-powered Park&Ride car park in the UK, according to a statement from BYD. The facility has 45 solar panels and an innovative battery storage system. The energy generated on site will be used, among other things, for 30 charging points installed at the car parks.

The BYD ADL electric double-decker buses are now tasked with shuttling traffic between the P&R car park and the city centre. The vehicles are each 10.8 metres long and offer 69 seats. The alliance of manufacturers puts their range at up to 160 miles, the equivalent of about 257 kilometres.

BYD meanwhile reports that it has also delivered its first electric buses to the Italian city of Ancona. The two electric midi buses with a length of 8.7 metres are operated by the local transport company Conerobus.