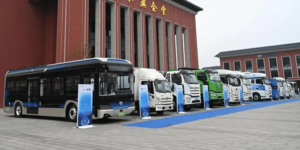 FAW Jiefang, the commercial vehicle division of the Chinese FAW Group, has established a new business unit for electrified vehicles and presented its plans for the unit. The new brand will include all ‘New Energy Vehicles’; battery-electric vehicles, hybrids as well as hydrogen-powered vehicles.

The new sales and production targets are a part of FAW’s new ‘15333’ NEV strategy. The numbers mean the following: The ‘1’ embodies the company’s ambition to become a leader among global CV makers, the ‘5’ refers to the five vehicle platforms, while the ‘333’ refers to the three NEV technical routes; battery-electric, hybrid electric, and fuel cell, as well as the deployment of the three areas of R&D, production capacity, and ecosystem, and three new energy CV-dedicated services entailing the separation of cars and batteries, the car rental and transport capacity connection, and the recycling of used cars and batteries.

The strategic five-year plan, which is the 14th in the company’s history, covers the period from 2021-2025. To facilitate the growth, FAW Jiefang plans to pour over 20 billion yuan ($3.092 billion) in building new energy innovation bases in four countries, and invest more than 10 billion yuan ($1.546 billion) in constructing a base focusing on fuel cell vehicles and systems, according to Hu Hanjie, chairman of FAW Jiefang.