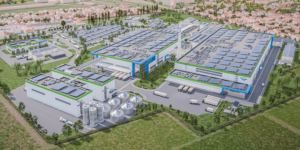 The Serbian company ElevenEs has announced a strategic partnership with EIT InnoEnergy to build the first LFP lithium-ion battery gigafactory in Europe. The location has already been decided, but construction is not due to start until 2024.

ElevenEs has developed its own LFP technology to produce batteries for electric cars, buses, trucks, forklifts, other industrial vehicles and energy storage systems. The company, with financial support from EIT InnoEnergy, is planning a 16 GWh factory in Serbia near the lithium deposits there. Construction of the 8 GWh plant in Subotica, which will be powered by renewable energy, is scheduled to begin in 2024. It will later be expanded to a capacity of 16 GWh

ElevenEs calculates that this is enough “to equip more than 300,000 electric vehicles per year with batteries”. In this calculation, the Serbian company thus assumed 53.3 kWh per vehicle, which seems realistic given the battery pack in a Tesla Model 3 SR+ with LFP battery (55 kWh).

Indeed, demand for LFP cells is increasing among vehicle manufacturers, as also shown by the recent rumours surrounding Tesla and BYD in China. Other rumours that Renault’s upcoming electric small cars might rely on LFP cells have not materialised for the time being. However, it is also considered an open secret in the industry that the VW Group is considering lithium iron phosphate batteries for its upcoming MEB entry models.

ElevenEs is a spin-off of AI Pack Group, a major aluminium processor. The company started work on an LFP battery in 2019, with the aim of developing a particularly sustainable and efficient cell. A research and development centre was recently opened in Subotica, Serbia, where the factory is also to be built. By the end of 2023, ElevenEs plans to expand the production capacities in the existing facilities to 300 MWh, after which the 8-GWh factory is to be built from 2024.

“LFP cells last more than twice as long as competing chemistries, they can be recharged up to 6,000 times, charge faster, can be repeatedly charged to 100% state-of-charge and cause practically no fires in EVs,” says Nemanja Mikac, founder and CEO of ElevenEs. “On top of that, they cost significantly less. It is the most popular choice in China today, which is still the global leader in battery technology.”

Investor EIT InnoEnergy is not new to battery technology: EIT is also one of the early investors in Swedish company Northvolt and French startup Verkor, which is known to have since struck a deal with Renault. However, it is not clear from the announcement how much EIT InnoEnergy is investing in ElevenEs.

“LFP batteries are the next big thing on the battery landscape,” says Jakub Miler, CEO of EIT InnoEnergy Central Europe. “Although nickel-based batteries outperform LFP on energy density and are likely to remain the best option for performance cars, LFP is far better in terms of cost, safety and lifetime, making it a perfect choice for industrial, ESS and city EV (shorter range) applications.”

As Miler elaborates, one reason for the investment was AI Pack Group’s industrial experience, which should enable ElevenEs to move faster. “We have been working with ElevenEs for the past year and a half, and what came as the biggest surprise to us is that as much as 70% of the aluminium packaging process and know-how coming from their mother company, Al Pack Group, can be easily transferred to cell production,” Miler says.

Tesla rumoured to have ordered battery cells from BYD