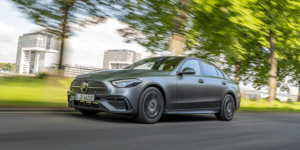 Following the launch of the new generation Mercedes C-Class presented in February, the first plug-in hybrid versions can now be ordered in the form of the C 300 e and C 300 e Estate, which are advertised with electric WLTP ranges of more than 100 kilometres.

This is supposed to be made possible by a 25.4 kWh battery, which has its own thermal management. Therefore, the battery should be able to be charged with up to 55 kW at peak – the stated charging time of 30 minutes with a completely empty battery suggests a flat charging curve. For AC charging, an 11 kW charger is on board.

While the battery size, charging capacity and range were already mentioned at the presentation in February, Mercedes had not mentioned any system performance of the PHEV variants until now. This is now being made up for at the start of ordering: as is well known, the electric drive system has an output of 95 kW; in combination with the 150 kW petrol engine, this results in a system output of 230 kW and a system torque of 550 Nm.

With the range, e-drive power and torque of up to 440 Nm in electric drive mode, Daimler assumes that “everyday routes can be covered for the most part purely electrically without using the combustion engine”. BEV-like driving behaviour with one-pedal driving is also said to be possible: At 100 kW, the recuperation power is even higher than the drive power. The recuperation power can be selected in three stages (in all driving modes except Sport) via the paddles on the steering wheel.

In addition to the 25.4 kWh battery, an “intelligent, route-based operating strategy” is also intended to contribute to driving with the lowest possible emissions. According to Daimler, the software selects the electric driving mode “for the most sensible sections of the route”. For this purpose, navigation data, topography, speed regulations and traffic conditions are taken into account for the entire planned route.

The market launch of the saloon takes place immediately, the estate will be in dealers’ showrooms from December. While prices for other European nations are yet to follow, list prices in Germany start at 56,168 euros (C 300 e) and 57,953 euros (C 300 e Estate), before environmental bonuses. Mercedes has also announced that diesel PHEVs will follow – but neither performance data nor prices are available.

The new C-Class will be manufactured at the Mercedes-Benz Cars plants in Bremen (Germany), Beijing (China) and East London (South Africa).