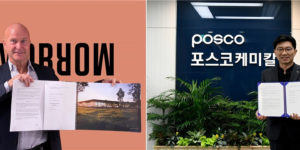 Morrow Batteries had announced at the end of 2020 that it would build a battery cell factory at Eyde Energipark in Arendal in the Agder region of southern Norway from 2023. The factory is to be powered by hydropower and be ready for operation from the fourth quarter of 2024. Initially, there was talk of a production capacity of 32 GWh in the final expansion stage, but earlier this summer the company revised this figure upwards to 42 GWh.

The factory will mainly produce batteries for the car and ship industries. The company estimates the investment volume at five billion kroner, the equivalent of about 470 million euros. The project is supported by funds from the EU’s Horizon 2020 research programme, among others. “Our ambition is to produce among the most cost-effective and most sustainable batteries in the world,” says Morrow CEO Terje Andersen.

Morrow is now teaming up with Posco Chemical for the preliminary products for the planned battery cell production. Based on a memorandum of understanding, the two sides have agreed to jointly approach the development and qualification of electrode materials, including active cathode and anode materials.

“The joint development will aim to exploit the synergies of both companies’ innovative product design, to enhance performance and safety of Li-Ion battery cells,” Morrow Batteries writes. Further, the cooperation is to culminate in a long-term agreement on the supply of battery materials for Morrow’s battery cells. However, the partners emphasise that the agreement is non-binding and non-exclusive. This fits in with the fact that in May Morrow had already reached an agreement with the recently founded Elkem subsidiary Vianode on the development of anode materials and their supply.

Audi is setting up a battery competence centre in Germany