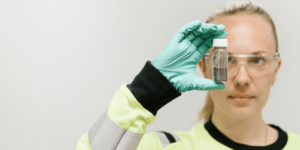 The Norwegian companies Morrow Batteries and Vianode have signed a memorandum of understanding for the development and supply of anode materials. Vianode is to supply Morrow’s planned battery cell plant with the jointly developed materials.

The two companies say they will develop customized materials for use in Morrow’s lithium-ion cells, including synthetic graphite and silicon-containing anode material. Both partners aim to leverage synergies in the relevant production and design process through the collaboration but stress that the agreement is non-binding and non-exclusive. The joint development work is then expected to lead to a long-term, high-volume supply agreement: To that end, Vianode plans to ship the anode materials from its planned battery graphite facility in Norway’s Herøya Industrial Park.

Both Morrow and Vianode have recently unveiled their own independent major projects. Morrow Batteries announced a few months ago that it plans to build a battery cell factory at Eyde Energipark in Arendal, in the Agder region of southern Norway, starting in 2023. The plant is to be fed by hydropower and be ready for operation from the fourth quarter of 2024. While there was previously talk of a production capacity of 32 GWh in the final expansion stage, the current announcement shows a significant increase in expectations, now mentioning 42 GWh. The factory will mainly produce batteries for the automotive and marine industries. The investment volume is to amount to five billion crowns, the equivalent of around 470 million euros. The project is supported in part by funds from the EU’s Horizon 2020 research program.

“Our ambition is to produce the most cost-effective and sustainable batteries in the world,” says Morrow CEO Terje Andersen. Partnerships with European-based suppliers ensured a world-leading regional supply of battery materials to the plants while keeping the carbon footprint as low as possible, he added. “This partnership is a good example of how we envision the development of the Battery Coast, a circular ecosystem built with industrial partners around the battery value chain.” Morrow Batteries was founded in 2020. The two lead investors are Agder Energi Venture, a wholly-owned subsidiary of Agder Energi, and NOAH, a wholly-owned subsidiary of Gjelsten Holding.

Vianode is even younger. The company’s formation was announced just this month. Norwegian metals producer Elkem has launched Vianode, an independent subsidiary for the development and production of anode materials for electric car batteries. The metal company is open to partners in this endeavour – it is “currently inviting external industrial and financial partners to participate.” Compared to the conventional production of anode materials, Vianode aims to reduce emissions by more than 90 per cent.

Vianode aims to build a large production facility at Herøya Industrial Park near Porsgrunn, located between Kristiansand and Oslo. The final investment decision on this is expected to be made this year, with construction starting before the end of the year if necessary. The cooperation with Morrow Batteries should certainly make a positive decision on the plant even more likely.

“We see great interest in Vianode’s planned large-scale production of sustainable active anode materials and have established dialogue with the leading battery cell manufacturers in Norway, Europe and the U.S.,” says Chris York, vice president of Vianode who noted the boom in interest for electric vehicle batteries. He explained: “The marketplace conservatively expects the battery demand growth to increase ten times over the current decade,” noting that this, of course, means interest in the materials that they are comprised of.

Vianoda has already received ten million kroner, the equivalent of one million euros, in funding from the government. This is in addition to grants from Agenur Innovation Norway for a pilot plant. And the company says it is on the shortlist for a grant from the EU Innovation Fund. In addition to Morrow, the developer has already found another major customer: parent company Elkem concluded a memorandum of understanding with Freyr last fall for the supply of anode active materials for the future Freyr factory. The planned cell factory in Rana, Norway, is expected to have an annual capacity of 32 GWh.