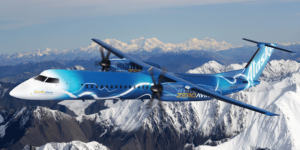 First to Mitsubishi and ZeroAvia since they already signed an agreement to develop hydrogen-electric propulsion for regional jets. Plus, this is the first time ZeroAvia will look into jet engines – the company’s previous projects were propeller machines. The new partner MHIRJ, on the other hand, is one of the world’s largest companies for the maintenance, repair and overhaul of CRJ series aircraft – the Bombardier Canadair Regional Jet is a widely used regional aircraft worldwide that can carry up to 104 passengers, depending on the version.

MHIRJ will leverage ZeroAvia’s fuel cell powertrain technology for the cooperation at hand, while the Mitsubishi subsidiary will deliver aircraft design, certification, and support experience. The partners expect to not only create new hydrogen planes but also retrofit existing aircraft in the market. MHIRJ will also support ZeroAvia by providing engineering services to get the engines through PART 33 certification for aircraft and assisting ZeroAvia by delivering advisory services evaluating the feasibility of a green retrofit program for regional aircraft.

Hiro Yamamoto, President and CEO of MHIRJ, considered regional aircraft “key to keeping smaller communities and regions connected” and said these were also more able to exploit the new technologies on the horizon than larger aircraft. “This is a logical place for this development to begin, and we are proud to be a part of this innovative solution,” he added.

To date, ZeroAvia has reportedly completed more than 35 test flights of a six-seat aircraft using its hydrogen fuel cell powertrain. Currently, it is working on converting a larger 19-seat jet with its powertrain with a first test flight expected in the coming months. ZeroAvia plans certification and market entry for its 19-seat powertrain by 2024, with an eye towards larger aircraft (50-80 seats) by 2026, and regional jets around 2028.

So while the MHIRJ collaboration is not expected to result in a series until 2028, ZeroAvia has also entered into another partnership, the result of which is likely to go into production sooner.

Cue in Alaska Air Group, the parent company of Alaska Airlines. The company has turned to ZeroAvia for a hydrogen-electric powertrain capable of flying 76-seat regional aircraft over 500 NM. Alaska is also joining the list of top investors for the company, alongside a fellow Seattle-based Amazon Climate Pledge Fund and Bill Gates’s Breakthrough Energy Ventures. Other investors in the UK and US-based company include British Airways and Shell.

Alaska and ZeroAvia engineers will work together to scale the company’s existing powertrain platform to produce the ZA2000, an engine family capable of producing between 2,000 and 5,000 kilowatts of power with a 500-mile range. The partnership will initially deploy ZeroAvia’s hydrogen-electric propulsion technology into a full-size De Havilland Q400 aircraft. ZeroAvia further states they would work closely with aircraft regulators during this project and set up a location in the Seattle area to support this initiative.

Should the project prove a success, Alaska has also secured options for up to 50 kits to convert its regional aircraft to hydrogen-electric power through ZeroAvia’s powertrain, starting with the Q400 aircraft. The company did not set a date for the launch—only ZeroAvia scheduled demonstrations for 2022.