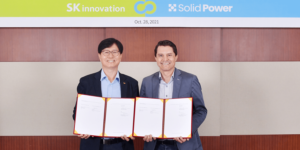 The South Korean company SK Innovation, which spun off its battery business on 1 October under the name SK On, says it will invest 30 million US dollars (about 25.9 million euros) to acquire a stake in Solid Power. The announcement does not say how many shares SK would receive for this amount.

On the other hand, SK Innovation gives further details on the technology: the solid-state batteries are to use an NCM cathode (the combination of nickel, cobalt and manganese widely used in lithium-ion batteries) and an anode with a high silicon content. The exact proportions of the materials are not mentioned, however – because it is part of the development work that is now pending. The basis is Solid Power’s solid-state technology platform. This is to be further developed and the partners aim to be “jointly tackling the technological challenges of commercialization”. The lithium metal anode, on which Solid Power says it is working, is not mentioned in the SK Innovation announcement.

SKI states that the goal is for the battery to achieve an energy density of 930 Wh/l or higher. That would correspond to “about 33 per cent more power than current lithium-ion batteries”, SKI writes. An electric car that could travel 700 kilometres with today’s technology would be able to cover up to 930 kilometres on one charge with the new battery.

Another development goal is that the new solid-state cells should be able to be produced on existing production lines for lithium-ion batteries. This will avoid the “need for expensive and time-consuming retrofitting of battery production facilities”. As part of the collaboration, Solid Power will be able to use SK On’s facilities.

Solid Power is already producing prototypes of its solid-state cell on its pilot production line at its headquarters in Louisville, Colorado, and is reportedly planning a second production facility. Previous partners and investors include Ford and BMW – both partners have already validated cell samples by the end of 2020. Production of automotive-grade batteries is expected to start in Colorado in early 2022.

“The partnership with SK Innovation is designed to validate that Solid Power’s all-solid-state production processes are scalable and compatible with existing lithium-ion production technology,” said Doug Campbell, CEO and co-founder of Solid Power. “The ability to collaborate with a global leader in lithium-ion cell production is key to our go-to-market strategy and meeting anticipated demand.”