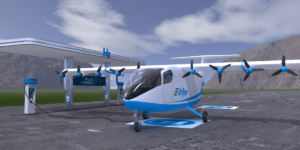 The acronym STOL stands for short takeoff and landing. The model being promoted by Airflow is intended to differ in this respect from helicopter-like VTOLs (Vertical takeoff and landing), which are currently being developed by many manufacturers with electric motors. The eSTOL, on the other hand, is an electric aircraft that needs short runways. The commercialisation of the Airflow aircraft is planned for 2025.

The Californian developer was founded in 2019 by five former Airbus employees who were involved in the aerospace company’s Vahana project. Vahana was a prototype electric and autonomous vertical take-off aircraft with eight propellers. The project was discontinued in December 2019 in favour of the CityAirbus.

Airflow, meanwhile, is forging partnerships in the aviation and supply industries. The latest example is a collaboration with Pipistrel to develop an all-electric propulsion system for Airflow’s proof-of-concept aircraft. As part of the collaboration, the Slovenian aircraft manufacturer will contribute electric motors, motor controls and batteries and “explore a partnership in the electric propulsion solution for Airflow’s eventual production aircraft”, according to Airflow.

“Pipistrel’s pioneering work in electric flight and their industry-leading experience in building and certifying powertrains for electric aircraft make them an ideal partner to help us build and fly an eSTOL aircraft,” expresses Marc Ausman, CEO and co-founder of Airflow. “They understand and can meet the challenges of a high performance system with the reliability and safety requirements of the aerospace industry.”

Another recent collaboration is with fuel cell specialist Plug Power, with the latter company also taking a financial stake in the Californian aircraft developer. Together, the two sides intend to develop and certify a hydrogen-based fuel cell propulsion system for Airflow’s eSTOL. Plug Power has been putting out feelers in the direction of aviation for some time. For example, it has a project with Universal Hydrogen and at Albany International Airport, where Plug Power’s fuel cell solutions power ground equipment.

“Over the last several years we’ve been increasing our commitment to the aerospace market,” confirms Andy Marsh, CEO of Plug Power. He says they know it is critical that the company’s ProGen solutions “meet the ultralightweight and rigorous certification requirements of aviation is essential to our ownership of this opportunity”.

Last but not least, Airflow says it has recently signed letters of intent worth over $600 million with 11 airlines, all of which operate short-haul aircraft.