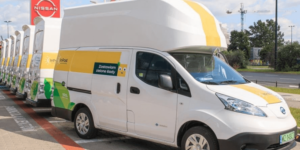 The Polish courier service InPost has procured 260 electric vans and expects these to join the fleet before the year’s end. InPost will then run a total fleet of 300 electric vehicles. The new vans on order primarily come from the Nissan retrofitter Voltia.

The order from InPost includes 250 Nissan e-NV200 vans and another ten Mercedes-Benz eSprinter vehicles. While the courier quotes Maciej Klenkiewicz, managing director of Nissan Sales CEE, saying Nissan was “working hard to keep up with demand” from clients such as InPost, Voltia has actually designed the vans on order. The conversion specialist from Slovakia reportedly retrofitted the Nissan van to hold up to three euro pallets. Nissan has been offering Voltia conversions through its dealer network since 2020.

For InPost, the courier is en route to decarbonise its operations. Couriers will use the new vans to deliver parcels directly and to a network of new lockers (“Paczkomaty”). “Our growing parcel locker network means we need more and better vehicles, but also environmentally friendly ones,” said InPost CEO Rafał Brzoska. As a result, the company estimates, the lockers would help deliver “hundreds of parcels through a single trip”, and more precisely, “Paczkomaty delivery reduces CO2 emissions by two-thirds compared to courier deliveries in urban areas and by up to 90% in rural areas.”

In addition, the company is running the ‘Poland Green City’ programme to this effect and said, participating cities would receive deliveries only by electric vehicle. These include Białystok, Chełm, Częstochowa, Kielce, Kraków, Łódź, Rybnik, Rzeszów, Sopot, Wałbrzych and Zielona Góra.

The Nissan e-NV200 XL from Voltia offers a payload of 580 kilograms. The drive system remains unchanged with 80 kW output and a 40 kWh battery that charges 6.6 kW AC via type 1 connection or CHAdeMO. The range is about 200 kilometres.

InPost was founded in Poland in 1999 and has been listed on the Amsterdam Euronext stock exchange since this year. The company says it has a network of over 19,000 parcel lockers in Poland, the UK and Italy. In July 2021, InPost acquired French parcel delivery company Mondial Relay. InPost and Mondial Relay together claim they delivered over 440 million parcels in 2020.