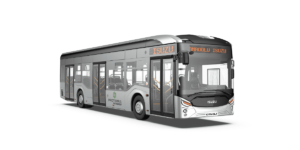 Proterra has received an order for its battery systems from the Turkish commercial vehicle manufacturer Anadolu Isuzu. The latter wants to integrate Proterra’s batteries into its new 12-metre and 18-metre Citi Volt electric bus models.

The energy content of the battery systems per vehicle and also the total scope of the order are not mentioned in the Proterra announcement. It only states that the Citi Volt buses from Anadolu Isuzu will have a range of between 200 and 405 kilometres.

For the American company Proterra, this is the first order for an electric bus in Europe and thus its entry into the European public transport market. For its part, Anadolu Isuzu hopes to increase its influence and market penetration in battery-electric buses, according to the statement.

“Europe has long been a global leader in the transition to zero-emission transportation,” said Proterra president Gareth Joyce. “The technology powering Proterra’s proven fleet of transit buses in North America can work for communities across Europe, too.” Battery systems for the Turkey customer will continue to be developed and manufactured in the US.

While this is the first electric bus battery order from Europe for Proterra, it is not from Europe in general: in February it was announced that Swedish startup Volta Trucks had ordered the batteries for its Volta Zero electric truck from Proterra.

Only last week, Proterra had received another large order, this time from North America: Lightning eMotors has ordered batteries for class 4 and 5 electric utility vehicles (as a shuttle bus or as a delivery vehicle with a box body).