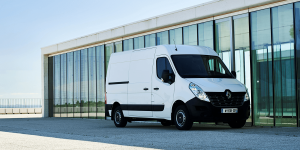 Renault Trucks has been testing their electric van Renault Master Z.E. for some time at selected clients such as PostNL in the Netherlands. Now sales have kicked-off officially at all Renault Trucks dealerships although offers may vary.

Take France for example, where the Renault Master Z.E. is available from 46,700 euros before tax and battery lease and France’s subsidy of 6,000 euros reportedly. In Germany however, prices include the battery and thus start at 59,900 euros.

In all countries, the electric van comes in six variants, that is four panel vans and two platform cabs. The Renault Master Z.E. features a 57 kW electric motor with a maximum torque of 225 Nm and the maximum speed is 100 kph.

Renault also confirmed the real-life range, saying the Renault Master Z.E. offers a range of 120 km (75 miles) and its 33 kWh pack can be fully charged in six hours. With the batteries mounted under the front seats, the load volume is the same as a conventional diesel Renault Master.

The truck also features the Z.E. voice alert system in order to warn pedestrians that the electric vehicle is approaching when it is travelling at speeds of below and up to 30 kph.