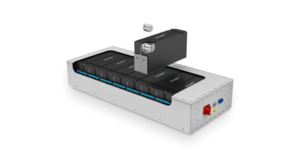 Akasol has presented the third generation of its battery systems. The new AKASystem 9 AKM 150 CYC is said to have a particularly high energy density and is suitable for fully electric long-distance applications such as coaches or trucks.

As Akasol announced on the occasion of the presentation at the Battery Show Europe (until 2.12.2021), series production is scheduled to start in 2023 at the Akasol Gigafactory 1 in Darmstadt. Each AKASystem 9 AKM 150 CYC has a nominal energy content of 98 kWh; with several systems, a battery can thus be scaled for the respective demand in the vehicle. The company does not specify a maximum size in the press release.

Akasol itself even speaks of the “highest energy density available on the market”, but does not give any figures. The increased energy content with the same installation space is made possible by the further development of the 21700 round cells that Akasol installs in the systems. In addition to the increase in efficiency and cost savings, the use of standard cells also enables a high availability of battery cells through various manufacturers with global production sites, the company says.

In the AKASystem 9 AKM 150 CYC, the round cells are actively cooled with a water-glycol mixture and can thus be kept in the ideal temperature range. The continuous charging rate is 1C, which means that a battery consisting of four systems, for example, has a charging power of just under 400 kW. Since the battery is fast-chargeable for opportunity charging and can also be charged overnight in the depot without any problems, the use of the system can be designed flexibly. Akasol specifies a service life of up to 4,000 charging cycles.

According to the manufacturer, the AKASystem 9 AKM 150 CYC has IP67 and IP6K9K protection classes and a high level of fire protection. The system is developed according to the industry standard ISO 26262. In addition, Akasol claims to increase fail-safety via several safety features – such as two separate CPU cores.

The company currently has one GWh of installed production capacity at its Gigafactory 1 in Darmstadt. The expansion to 2.5 GWh in the course of 2022 has been decided; depending on customer demand, Darmstadt can be expanded to up to five GWh. As Holger Dilchert, Head of Sales On-Highway at Akasol, states, production of the AKASystem 9 AKM 150 CYC is also planned at the US plant in Hazel Park from 2023. The production capacity there is expected to be two GWh.