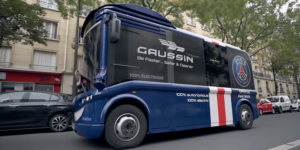 Gaussin announced the acquisition of a worldwide license (outside France) from Bolloré subsidiary Bluebus for its 6 meter, 22 passenger electric bus, equipped with LMP batteries. The vehicle will be renamed Cit-e and manufactured through Gaussin’s current and future network of licensees.

The Cit-e itself is marketed as a “transport solution for private or public transport applications of the 1st and last-mile focused on safety, performance and respect of the environment”. The electric bus was almost exclusively sold in France since 2011, where it still is in operation with more than 50 customers. The Cit-e has a passenger capacity up to 22 persons, running on a 90 kWh battery and top speeds up to 70 km/h.

Bluebus most recently presented their newest electric bus model in October, after a major bus order for public transport in Paris in the summer.

Gaussin has steadily been building up their business and market reach lately, with a partnership in Australia with Newport. The company also secured access to battery suppliers with Microvast. Different market approaches are being combined under the company’s roof, however, as they also recently presented a hydrogen racing truck, which will likely also see some of its components used in urban transport.

Renault gives the Master Z.E. a battery and range upgrade