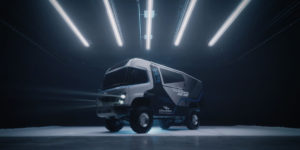 French manufacturer Gaussin has unveiled its first electric truck, the H2 Racing Truck. The fuel-cell-powered truck is to demonstrate the performance of Gaussin’s announced electric platform on long-distance missions such as the Dakar Rally in January.

According to Gaussin, the H2 Racing Truck will be a technology carrier for further developing its road truck range planned for 2022, based on its new skateboard platform for BEV and FCEV trucks. Gaussin that enters the electric truck market as a newcomer, expects the architecture to support vehicles from 18 to 44 tons.

For the H2 Racing Truck specs, the four-wheel-drive model, approved for road use, combines two 300 kW electric motors with an 82-kWh battery pack and a 380-kW fuel cell. The system also includes a cooling system and tanks able to hold 80 kilograms of hydrogen. Gaussin quotes a range of around 250 kilometres under racing conditions, meaning at a top speed of 140 km/h and a refuelling time of 20 minutes.

The manufacturer says that the lightweight chassis was explicitly created for the performance and integration of the hydrogen system. The latter, it says, has been tested with racing conditions in mind under extreme conditions “that go far beyond manufacturers’ usual tests for road use.”

In the racing truck’s design, the cooperation with Pininfarina comes into play for the first time. The French firm had engaged the Italian design house in the summer to “create a completely new cabin concept that stands for driver comfort and safety and at the same time intelligently combines with the platform.” The design is expected to distinguish and permeate the entire range of Gaussin’s trucks in future.

Four other zero-emission models have been slated for series production: a tractor unit, an autonomous truck, a distribution vehicle and a construction vehicle. In future fuel cell-powered road trucks, the range is expected to increase to 800 kilometres. Alternatively, Gaussin is working on BEV versions with a battery swap system, which should have a range of 400 kilometres with a battery exchange taking three minutes.

The Gaussin Group recently established its subsidiary for road transporters when launching the electrified vehicle platform for use in-house and through third parties. In the latter category, Gaussin cites “market participants in the field of autonomous navigation software” as a target group, among others, because the skateboard is also intended to be suitable for autonomous semitrailer trucks.

The platform itself is still scheduled for market launch in 2021. Gaussin does not yet give a timeline for its trucks. In June, the company announced that Microvast would supply the batteries for the skateboard. The long-term collaboration between Gaussin and the battery manufacturer calls for the supply of batteries with a total capacity of at least 1.5 GWh over the next five years and up to 29 GWh by 2031. The contract also includes different battery types: Microvast says it can “provide a wide range of different cell chemistries in its standard battery packs to meet different performance, energy density and lifetime requirements.”

Gaussin’s plans are ambitious: the goal is to produce the skateboard through a network of licensees to accelerate its international diffusion, so the French firm. The planned programme of 41 licenses within 36 months would allow Gaussin to capture five per cent of the clean-energy truck market, representing cumulative sales of 450,000 vehicles by 2031.

Gaussin is a specialist in freight and passenger transportation, autonomous technologies for AGVs (automotive guided vehicles), and battery and fuel cell integration. The company says it has 50,000 vehicles operating worldwide in the port and airport mobility, logistics and passenger transport sectors. The company cites Siemens Postal, Parcel & Airport Logistics in the airport sector, Bolloré Ports and ST Engineering in the ports, and Bluebus (also a Bolloré subsidiary) in the passenger mobility sector, among others, as strategic partners.