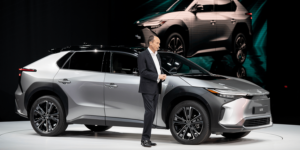 Toyota Motor Europe (TME) emphasises three points in its strategy: the goal of carbon neutrality, the acceleration of the electrification plan and the ambition to play an active role in building a hydrogen economy. The most important news: By 2030, Toyota aims for a ZEV (Zero Emission Vehicle – meaning both battery and fuel cell vehicles) share of 50 per cent in its sales in Western Europe, with “the capacity and possibility to further increase the share if customer demand increases even more”, as the Japanese company emphasises.

From 2035 onwards, Toyota then wants to register only zero-emission new cars, as required by the EU Commission – although the group continues to speak only of Western Europe: “After 2030, we expect ZEV demand to accelerate further, and Toyota will be ready to achieve 100% CO2 reduction in all new vehicles in Western Europe by 2035, provided that sufficient electric vehicle charging and hydrogen refuelling infrastructure is in place by then and the necessary renewable energy capacity is developed,” says Matt Harrison, president and CEO of Toyota Motor Europe.

This is not a departure from Toyota’s philosophy of basically relying on a mix of hybrids, BEVs and fuel cell cars for electrification. The company says that the most efficient way to achieve carbon neutrality is through a diversity of powertrain solutions, as markets around the world are very different.  “Toyota is committed to providing millions of battery-electric vehicles for its customers. The way to achieve the most net carbon emissions reductions globally is to use all components of our toolbox, including hybrid, plug-in hybrid, battery and fuel cell electric vehicles, optimising the balance of each component to best address infrastructure constraints and customer needs in each region, as well as the limited supply and increasing performance of batteries,” Toyota declares with the presentation of its strategy.

The carmaker already outlined its battery strategy in detail in September. Here, Toyota plans to invest a total of 1.5 trillion yen (about 11.5 billion euros) in expanding its battery production to a capacity of at least 200 GWh and in battery development by 2030. In addition, the Japanese company now says that they expect to reduce battery costs per vehicle by 50 per cent in the second half of the 2020s by further developing their battery technology. Regarding Toyota’s ambitions to use solid-state batteries, it says that they are “likely to be introduced first in hybrid vehicles before being used in battery electric vehicles to enable higher performance, longer range and shorter charging times”.

In the course of the European strategy update, Toyota also premieres the bZ4X – the first representative of the electric label ‘bZ’ (beyond zero), under which Toyota plans to launch a whole series of battery-electric vehicles. The company is planning seven planned BEV models based on the eTNGA platform. Initially, Toyota will export the electric cars from Japan to Europe. However, the company is also planning to produce electric vehicles in European Toyota plants – probably after 2025. “Of course, we need electric (car, ed.) production in Europe,” Harrison confirmed in an interview with the German trade and business newspaper Handelsblatt, saying that this should also include European battery cell production. However, Harrison explained that Toyota has not yet decided whether the battery cells will be produced in-house or sourced from suppliers.

We compiled all the information on Toyota’s first electric vehicle in detail here about a month ago. But briefly here to recap: Weighing around 2 tonnes, the electric mid-size SUV will be available with a choice of 150 kW front-wheel drive or all-wheel drive, combining two electric motors with 80 kW each. The battery has an energy content of 71.4 kWh and is expected to enable WLTP ranges of more than 450 kilometres. The maximum DC charging power is specified at 150 kW. For AC charging at 11 kW, a three-phase onboard charger will be available from the end of 2022. Until then, the bZ4X will only charge at 6.6 kW. Toyota says that power specifications are still preliminary before homologation.

Other news from the Japanese company concerns the introduction of the new fifth-generation Corolla Cross Hybrid with full hybrid drive, which is due to be launched next year. Also the start of production of a new generation of fuel cell systems, which will begin in January 2022 at Toyota in Brussels.

Separately, Reuters news agency, citing insiders, reports that Toyota plans to launch a small electric sedan with BYD’s LFP batteries on the Chinese market in late 2022 as part of its Chinese joint venture with BYD.

Finally, Toyota’s Lexus brand presents its ambitious growth plans: These envisage the launch of 20 models by 2025, almost doubling the volume to 130,000 units. Lexus is already putting two new products in the spotlight: the latest plug-in electric model NX450 and the ROV Concept buggy. The brand also shows a teaser of the new all-electric RZ for the first time.

Toyota has announced the first details and prices of its bZ4X pure electric SUV in the UK ahead of its UK sales launch in 2022. Toyota’s first purpose-designed battery electric vehicle will be offered in three equipment grades plus a special, high-specification Premiere Edition. Prices start from £41,950 for the cheapest of the six variants available. The bZ4X Premiere Edition is launching at £51,550.

Polestar shows prototype of the Polestar 3