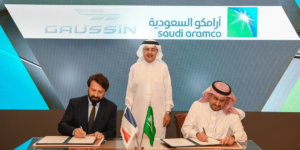 The Saudi Arabian Oil Company (Aramco) has just announced the signing of five agreements with French companies, including an agreement to explore a hydrogen-powered vehicle business with Gaussin. Here, Gaussin aims to establish a modern manufacturing facility for hydrogen vehicles ‘Made in Saudi Arabia.’

The two companies also agreed that Aramco’s Advanced Innovation Center (LAB7) will be closely involved in Gaussin’s development of hydrogen-powered vehicles and the development of a remote-controlled/autonomous hydrogen racing truck.

Just last month, Gaussin unveiled its first hydrogen-electric truck, the H2 Racing Truck. The fuel-cell-powered truck is to demonstrate the performance of Gaussin’s announced electric platform on long-distance missions such as the Dakar Rally in January 2022 Dakar Rally in Saudi Arabia. Aramco will also be sponsoring the hydrogen-fuelled racing truck, which will run as an experimental new energy vehicle.

Saudi Arabia appears to be generally interested in the production of hydrogen fuel cell trucks. Earlier this year, Hyzon Motors signed an MoU to produce fuel cell trucks in the country. Here, Hyzon Motors plans to build an assembly plant in Saudi Arabia with the local industrial conglomerate Modern Group. The plant is to be built in the city of Neom in the northwest of the country and will have an annual capacity for the assembly of up to 10,000 FC commercial vehicles.

The other French-Saudi cooperations announced at the same time as this most recent agreement between Saudi Arabia and Gaussin, involve non-binding MoUs not relevant to the transport industry with the exception of a non-binding agreement with Air Liquide, which may or may not be relevant.

Here, Air Liquide is to evaluate ‘low-carbon’ hydrogen and ammonia production, logistics, and back cracking technology (generally turning ammonia, which is easier to transport, back into hydrogen) and an additional non-binding MoU to evaluate Carbon Capture & Sequestration (CCS) opportunities. This would represent the move familiar from oil giants recently to shift their assets to new technologies as the end of the oil age draws near. This comes with a particular interest in hydrogen and ammonia production that utilise fossil-fuel processes with carbon capture for this stage of the process to reduce carbon emissions from this stage of the process.

The Middle East region has also recently come to the attention of other countries interested in producing green hydrogen – meaning of course, hydrogen produced from renewable energy, such as solar, which is abundant in the Saudi Kingdom, although it does not appear that this is the plan here. Elsewhere, Air Liquide is quite active in green hydrogen production.

For its part in the hydrogen revolution, Gaussin is bringing a little style. Pininfarina is responsible for the design of the new Gaussin electric truck range revealed in summer just passed. Gaussin’s future trucks are based on a new skateboard platform that is suitable for both battery-electric and fuel cell trucks from 18 to 44 tonnes.