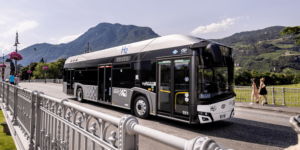 Solaris has signed a deal with the Czech city of Ústí nad Labem to deliver up to 20 fuel cell buses of type Urbino 12. It is the first order for hydrogen buses in the Czech Republic Solaris has received.

According to Solaris, the framework agreement is valid for eight years, during which time the city’s public transit company holds an option over 20 hydrogen-powered buses. Once activated, the Polish bus maker must deliver within 420 days.

Solaris describes the Urbino 12 hydrogen as its most technologically-advanced vehicle. The Polish bus maker had unveiled the hydrogen version of its best-selling Urbino 12 model in Stockholm in June 2019 as reported. The bus comes with two electric motors with an output of 125 kW each, 70 kW fuel cell modules, a small battery and five hydrogen tanks made of composite material with a total capacity of 1,560 litres. Solaris specifies a range of at least 350 kilometres.

The vehicles for Ústí nad Labem will include a passenger counting system, a system for the visually impaired and USB charging sockets on each row of seats. In addition, according to Solaris, the examples will have air conditioning with a CO2 heat pump.

This is the first contract for hydrogen buses in the Czech Republic. However, it is not the first collaboration between the bus maker and the city of Ústí nad Labem. According to Solaris, 44 Solaris buses with different types of propulsion systems are deployed there in public transport.

“Over the years, we have delivered over 1200 vehicles with different drives, i. e. diesel, CNG vehicles and trolleybuses, to the Czech Republic. The latest contract for the delivery of up to 20 hydrogen buses is absolutely groundbreaking,” said Petros Spinaris, Board Member of Solaris for Sales and After Sales. He also congratulated the carrier, Dopravní podnik města Ústí nad Labem, on this “prestigious investment.” Spinaris further mentioned growing interest from operators.

At present, Solaris claims it has signed contracts for and delivered almost 100 Urbino 12 hydrogen buses to clients from Austria, France, the Netherlands, Germany, Poland, Sweden, Italy, and now the Czech Republic.