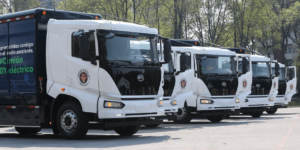 All BYD is revealing about the vehicles themselves so far, is that they use LFP batteries – similar to the company’s battery-electric buses. The Chinese manufacturer has also not revealed the details of the range of the truck which is said to be sufficient for distribution transport tasks “throughout the entire urban area.” This will include the vast metropolis of Mexico City where the brewery group is headquartered.

Rodrigo Albuquerque, Executive Director of Logistics of Grupo Modelo, revealed, “We hope for an electric logistics truck fleet consisting of 500 trucks in the next two years. By 2022, we will have another order for 30 electric trucks and 20 electric forklifts.” The logistics director also revealed that the company is aiming to fully electrify its entire heavy-duty fleet. “Purchasing the electric heavy-duty trucks from BYD is part of our strategy.”

Grupo Modelo is part of the Anheuser-Busch InBev brewing group. The Belgian company had expanded its 50 per cent stake in the Mexican company at the end of 2012. Grupo Modelo is mainly active in its home country, and its best-known brands include ‘Corona Extra.’ For Anheuser-Busch, these are not the first electric trucks: in 2019, the group ordered 21 electric trucks for California from BYD. In addition, Anheuser-Busch is among the pre-orderers of the Tesla Semi and 800 H2 trucks from Nikola Motor.

Electric trucks used for beer transport are not a novelty: In Amsterdam, Heineken is using an all-electric beer truck based on a Fuso eCanter to deliver to cafés in the city centre with zero emissions. In Switzerland, the Feldschlösschen brewery (part of Carlsberg) has put 20 Renault D Wide Z.E. into operation. Brazilian brewer Ambev already ordered 1,600 electric trucks from VW in 2018 and another 1,000 electric vehicles from the Brazilian manufacturers FNM and Agrale and its associated start-up FNM just under a year ago.