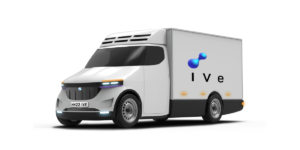 The British company Innervated Vehicle Engineering (IVE) is developing a small van with fuel cell propulsion, which is to go into production in 2024. The IndiGo, with a payload of 1.5 tonnes, will have a range of up to 900 kilometres.

The van has a permissible total weight of 3.5 tonnes, which means it can still be driven with a car driving licence. The hydrogen is stored in three tanks, each with a capacity of 4.5 kilograms. With the maximum possible 13.5 kilograms of hydrogen, the range should be between 660 and 900 kilometres, depending on the load.

Information on the drive system is still very sparse: the German portal Autonotizen writes that the fuel cell is supposed to produce 45 kW, but there is no information on the power of the electric drive or the size of the buffer battery. It is also unclear whether the battery – as is the case for the three fuel cell transporters of the Stellantis Group – can also be charged by cable.

Unlike hydrogen transporters offered so far, such as the Opel Vivaro-e Hydrogen, the transporter from IVE is not based on an internal combustion engine platform. The chassis developed purely for the fuel cell transporter could thus be optimised for the drive technology. So far, however, there is only information on the payload of 1.5 tonnes, or two tonnes in Great Britain, where e-vehicles may even be moved up to 4.25 tonnes with a passenger car driving licence. The volume of the load space, however, is not yet known.

The fact that the company is developing the body itself should also reduce production costs. Since large metal parts are allegedly not used, no production facilities with large and expensive sheet metal presses are necessary. This should also contribute to sustainability in order to reduce resource consumption and energy requirements for production.

In 2023, the first pre-series vehicles are to enter the test phase, and the start of production in the Mira Technology Park near Birmingham is planned for 2024. Since some expensive production facilities will be dispensed with, CKD (Completely Knocked Down) assembly in the sales markets should also be possible. Pre-orders should be possible by the end of 2023, but IVE has not yet announced a price.