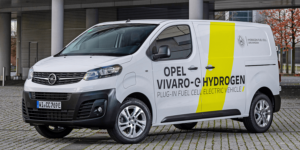 Stellantis had announced the fuel cell version of the three van models in April 2021. Subsequently, first Opel, then Citroën and Peugeot had presented their respective models. The FC vehicles are manufactured at Opel Special Vehicles (OSV) in Rüsselsheim. The global “Hydrogen & Fuel Cell Competence Centre” of the parent company Stellantis is also located at the Opel headquarters.

“With the new Opel Vivaro-e HYDROGEN we are opening the next chapter in our sustainable mobility offensive,” says Opel CEO Uwe Hochgeschurtz on the occasion of the production start. “The clever concept combines the advantages of hydrogen fuel cell propulsion with the versatility and capabilities of our best-selling light commercial vehicle.”

Head of development Markus Lott adds that the hydrogen variant “perfectly meets the requirements of fleet customers”. “The hydrogen van is the ideal solution for driving long distances with zero emissions as well as for transporting larger loads without losing time while charging the batteries,” says Lott.

The FC versions use the familiar 100 kW drive from the battery-electric models. Since the hydrogen tanks installed in the underbody require a longer wheelbase, the fuel cell versions are only available as M and L (4.96 and 5.30 metres). Up to 400 kilometres according to WLTP should be possible with one tank filling. The fuel cell has an output of 45 kW, which Opel says is “enough power for continuous driving on the motorway”. Short-term higher power demand is covered by the 10.5 kWh battery, which at its core is known from plug-in hybrid models – and provides for another 50 kilometres of battery-electric range.

The drive technology and energy storage systems are installed in such a way that the load space corresponds to that of the combustion models – i.e. 5.3 or 6.1 cubic metres, depending on the vehicle. The payload is up to 1,000 kilograms.

According to the Stellantis announcement, the first customer for the hydrogen transporter is the household appliance manufacturer Miele. The Vivaro-e Hydrogen is to be used in daily field service in the Rhine-Main region. The region is relatively well supplied with hydrogen filling stations: there are four H2 filling stations in Frankfurt, plus one each in Wiesbaden, Bad Homburg and Darmstadt.

Shortly after Opel began manufacturing the fuel cell version of its Vivaro van model based on the battery-electric Vivaro-e in Rüsselsheim, Citroën has now also announced the start of production and delivery of the sister model ë-Jumpy Hydrogen. The first example will be delivered in the next few days to the French Suez Group for full testing, which will use the vehicle at its Carcassonne site.