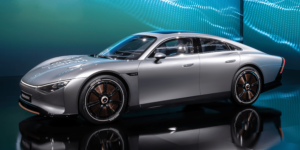 Mercedes-Benz has unveiled a new electric concept car at the CES with the Vision EQXX. As with previous CES concepts by the Stuttgart-based company, the Vision EQXX is not a concrete forerunner of a production model but is intended to provide a preview of a range of technologies that aimed to make production vehicles more economical.

The mission of the car is to become the most efficient Mercedes-Benz ever built, as the manufacturer states. In terms of range, the Vision EQXX is to “reach a new level” with over 1,000 kilometres from a single battery charge. And this is not due to a larger battery, but to the more efficient use of energy. However, the 1,000 kilometres were not determined in a test, but based on internal, digital simulations, so “it can be assumed that the technology carrier will travel over 1,000 kilometres in real road traffic on a single battery charge”, according to Mercedes.

The basic levers are anything but new: the powertrain itself is to become more efficient, lightweight materials reduce weight, special tyres lower rolling resistance. Combined with sophisticated aerodynamics – the cW is 0.17 – and integrated solar cells, consumption is to be reduced to below 10 kWh/100km.

What is supposed to be new about it is how these individual goals have been achieved – and how they have been integrated into a complete package. The “radically new” drive concept developed by Mercedes-Benz is supposed to enable an efficiency of 95 per cent from the battery to the wheels. This therefore concerns not only the electric drive system as such, but also the power electronics and the entire mechanics of the drive train. “One of the best ways to increase efficiency is to reduce losses,” says Eva Greiner, chief engineer for electric drive systems at Mercedes-Benz. “We worked on every part of the system to reduce energy consumption and losses through system design, material selection, lubrication and thermal management. And our excellent simulation tools helped us to quickly find out what works and what doesn’t.”

Mercedes does not go into more detail about the electric drive system in the statement, but they could be the axial flux motors made by Yasa, a specialist acquired by Mercedes. The power is said to be around 150 kW.

For the battery, the engineers collaborated with experts from the Formula 1 subsidiary High Performance Powertrains (HPP) and Mercedes-Benz Grand Prix (MGP). The lightweight battery housing contains 100 kWh, but the ready-to-install battery pack is only half the size and 30 per cent lighter than the battery pack from the Mercedes EQS. Daimler CEO Ola Källenius states that the battery “would fit in a small car”. Adam Allsopp, Advanced Technology Director at HPP, adds: “In the development of the battery management system and the power electronics, the greatest emphasis was placed on reducing losses. In achieving this efficiency milestone, we’ve learned a lot that will inform future development programmes.”

Specifically, an increased proportion of silicon in the anode is expected to contribute to the higher energy density – a route currently being taken by a number of companies. In addition, the battery platform developed by the Mercedes development department and HPP should achieve a higher degree of integration – in other words, more space for the cells with less installation space and weight. In addition, the battery voltage has been increased to 900 volts – as in the Lucid Air. Work has also been done on the battery management system: The battery has active cell balancing. It ensures that energy is drawn evenly from the cells while driving, which further increases system efficiency.

Although the battery is only charged by cable, the Vision EQXX has 117 “ultra-thin” solar cells integrated into the roof. The solar cells do not directly charge the high-voltage battery – Mercedes says it is still working on this with its partner Fraunhofer ISE – but are used for other systems. By reducing the energy demand from the high-voltage battery in this way, up to 25 kilometres of additional range per day should be possible. However, practical experience has so far shown that the effects are much smaller in Central Europe, for example.

Other consumers have also been given a helping hand: An innovative thermal management system is designed to increase the efficiency of the cooling of the vehicle components. A coordinated interaction of air flaps, coolant valves and water pumps is intended to ensure that the powertrain, including the power electronics, always operates within the optimum temperature window. The new “multi-source heat pump” has an external heat exchanger and can thus, according to Mercedes, operate over a wider temperature range – and, for example, also be able to utilise the last bit of residual heat when dehumidifying the ambient air thanks to the “evaporator enthalpy”. . Enthalpy is the latent energy released as heat when water vapour in the air changes its state of aggregation from gaseous to liquid.

Other features of the EQXX are not directly related to the electric drive or other power consumers, but still have an impact on power consumption and thus range. The aerodynamic and lightweight body reduces air resistance and weight. The same applies to the clad magnesium rims. Lighter brake discs made of an aluminium alloy are installed under the rims, which also help to reduce the vehicle weight. In total, there are still about 1,750 kilograms. The battery accounts for 495 kilograms of this.

Another development derived from racing is the purely electric chassis, which uses a subframe inspired by Formula 1 racing cars. This brings “racing efficiency to the road”, says Mercedes. Whether it also drives costs up to motorsport levels will then be seen in series development: Mercedes states that “many of the innovative developments are already being integrated into production”, “some of them also in the next generation of the MMA, the modular architecture for compact and mid-size vehicles from Mercedes-Benz”.

Around four months after the premiere of the EQXX technology concept, Mercedes conducted a demonstration drive. The result: the technology vehicle covered 1,008 kilometres in real road traffic on one battery charge – including crossing the Alps and less than ideal external conditions.

Now, the test was repeated with slightly higher temperatures, and the Vision EQXX beat its own record set in April. The concept car drove 1,202 kilometres from Stuttgart to Silverstone in Great Britain on one battery charge – even at motorway speed. The fact that the consumption of 8.3 kWh per 100 kilometres was again somewhat lower is partly due to the temperatures, but also to the route profile – this time the Alps did not have to be crossed. Downhill recuperation can recover some energy, but not all.

During the journey, there were a few hurdles at up to 30 degrees, such as a motorway closure including a bypass near Pforzheim and the traffic jam on the M25 around London. On the Formula 1 track in Silverstone, the EQXX was able to complete eleven laps – another 64.8 kilometres – after the long journey.

BMW i4 and iX price & EPA range revealed for the USA