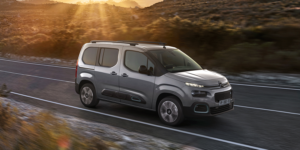 Citroën has announced the elimination of ICE of their passenger van lineup, namely the Berlingo Electric and ë-SpaceTourer Electric. Further, the Stellantis subsidiary announced price reductions for both ranges to take effect from 11 January 2022.

Simultaneously to the removal of the internal combustion versions from the range, there will be reductions to the manufacturer’s recommended retail prices of the Citroën ë-Berlingo Electric and ë-SpaceTourer Electric, effective from tomorrow. The new prices for the ë-Berlingo Electric are designed to allow both the ‘Feel’ and ‘Flair XT’ models to continue to qualify for the government grant.

The MRRP for the range now starts at £30,995, resulting in a price starting from £29,495 once the plug-in vehicle grant has been applied. In addition, the Citroën ë-SpaceTourer Electric range has received a reduction in MRRP on the recently introduced ‘Business Edition’ trim level. With pricing starting from £31,795 (£30,295 with £1,500 PiVG applied), both ‘M’ and ‘XL’ lengths will both qualify for the grant.

In addition to the van marketing changes, another Stellantis subsidiary is making changes to their lineup: Following on from the price reductions across the Corsa-e and Mokka-e model lineup, Vauxhall has also repositioned the pricing of its all-electric Combo-e Life and Vivaro-e Life Combi models in light of the recent changes to the Government’s Plug-in Car Grant. The Combo-e Life now starts from £29,610 after applying the grant and the Vivaro-e Life now starts from £30,295 (including PiCG).

Following the above announcement of changes to the lineup, Citroën UK has also expanded its ë-Berlingo Electric lineup to include a seven-seat version in their top-of-the-range ‘Flair XTR’. Previously, the trim was only available as a more compact medium version with five seats. The new van in XL length offers customers an extra 35 centimetres over the M version, allowing for a maximum load length of over three metres and 500-litres more load capacity with the rear seats folded, so the company.

The new extra-large Citroën ë-Berlingo Electric’ Flair XTR’ XL is available to order now, priced from £32,995. The van thus qualifies for the Plug-in Car Grant in the UK. The ë-Berlingo Electric range starts at £29,495 after applying the PiCG.

Vitesco receives order worth billions for 800V inverter from the USA