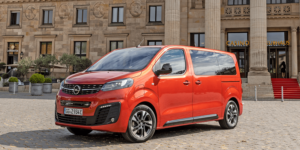 The Stellantis brands Opel, Citroën and Peugeot now offer the passenger car versions of their van models only with a fully electric drive.

At Opel, customers can now order the Combo Life, Vivaro Combi and Zafira Life models exclusively as BEVs. At Citroën this applies to the Berlingo passenger car and SpaceTourer and at Peugeot to the Rifter, Traveller and Expert estate.

The three Stellantis brands have announced that the drive versions with internal combustion engines, which have also been available up to now, are no longer included in the range of passenger car models. For the commercial vehicle versions, which are used by tradesmen or delivery services, for example, the diesel will remain in the range – but it is not known for how long.

“There is no alternative to electrification,” says Opel CEO Uwe Hochgeschurtz. “In the future, Opel will gain even more traction with environmentally friendly innovations. And what shows us the rapid change again very clearly: From 2024, we will offer an electrified version of every Opel model, without exception. In other words, the successors to Crossland and Insignia will also be electrified.” Hochgeschurtz also reaffirmed the goal already set under his predecessor Michael Lohscheller that Opel will only sell battery-electric cars in Europe from 2028.

At Peugeot, Global CEO Linda Jackson says: “In 2021, every sixth vehicle sold by PEUGEOT in Europe was electrified and, in November, this reached one electrified PEUGEOT vehicle out of every five sold,” she said. “This shows that we at PEUGEOT have the right offer for our customers and that the demand for electrified vehicles is consistently fast-growing.”

Citroën writes: “A pioneer in the MPV and Leisure Activity vehicle segments, Citroën is shifting its offer on these 2 segments towards an energy of the future that will allow customers to continue to be able to move freely and with controlled cost of use, while taking advantage of the livability and practicality offered by these two lines.”

All of the aforementioned models are known to use the EMP2 base, which was developed back in PSA days. The 100 kW electric motor is supplied by Vitesco Technologies. In the high-roof station wagons, the electric drive system is combined exclusively with a 50 kWh battery, while in the minivans 75 kWh is also available as an option for the longer-wheelbase variants.

The conversion to pure electric drives has so far only been confirmed for Opel, Peugeot and Citroën. However, the minibus will also be offered as the Toyota Proace Verso Electric and soon as the Fiat Ulysse. It is not yet clear whether the conversion to an electric drive will be completed here as well.