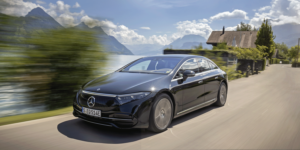 The sales share of electrified cars is thus around 9.5 per cent. In 2020, it was still 7.4 per cent. Mercedes was thus able to grow, but more slowly than planned: At the beginning of 2021, an “xEV share” of 13 per cent was announced for the full year – in the past, Daimler combined BEV and PHEV under this designation, but currently this abbreviation is no longer used by the group.

Since the market release of the EQS in August 2021, 16,370 orders have already been received. However, the Stuttgart-based company points to the fact that the market launch of the EQS in the two largest markets – the United States and China – only took place in December – “so that a dynamic development of incoming orders can be expected”.

“Order intake for the EQS, the longest-range EV on the market today, is very encouraging and production of the first all-electric AMG kicked off in December, starting a new chapter for our electric flagship,” says Daimler and Mercedes board member Britta Seeger, who is respectively responsible for sales. “This strong global demand for all our brands gives Mercedes-Benz the tailwinds to accelerate into a new electric era.”

According to internal calculations, Mercedes-Benz expects to have achieved the CO2 fleet target in Europe on its own. For 2022, the company expects a further reduction in emissions “as the ramp-up of fully electric and plug-in hybrid vehicles continues to gain momentum”.

Across all drive types, Mercedes-Benz Cars delivered 2,093,476 passenger cars, a drop of five per cent. The semiconductor crisis is cited as the reason for the decline, with demand “very high in all segments and in all regions”. Mercedes does not say whether the chip shortage has also affected the production of electric cars. Including vans, more than 2.4 million vehicles were delivered in 2021.