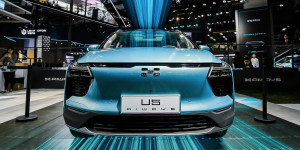 The Chinese electric car manufacturer Aiways is “thinking about manufacturing cars in Europe”, as Aiways CEO Alexander Klose said in an interview. Germany is in the running as a factory location.

Aiways wants to combine production with externally organised battery manufacturing, he said. “We have not yet decided on a location – but several have been suggested to us,” Klose told the German publication WirtschaftsWoche. “We would prefer to use an existing plant, it depends on the conditions.”

As Executive Vice President Overseas at Aiways, Klose is responsible for the company’s overseas activities, meaning its presence outside the Chinese market. Klose is also responsible for product strategy.

Klose did not give any further details about possible locations in Germany and Europe to the business magazine, but pointed out that they were “still at the very beginning”. Regarding Klose’s statement that it would be preferable to use an existing plant, “Wiwo” adds that there is a lot of overcapacity in European plants – “at Opel, for example”.

Klose also does not provide more details on planned production capacities and “externally organised battery production”. So far, the company, founded in 2017, is producing the U5 at its plant in Shangrao, China. Up to 150,000 vehicles per year can be built there, with up to 300,000 vehicles possible in a later expansion stage. The factory consists of a stamping shop, a body shop, a paint shop, a battery packing station and an assembly hall.

Last year, Aiways sold a four-digit number of cars in Germany, according to Klose. Aiways is not yet shown separately in the Federal Motor Transport Authority’s sales figures. So far, applications for the environmental bonus have therefore been considered the best indicator of Aiways sales in Germany. For the U5 MY21, however, the current BAFA list shows only 719 applications, specifically 622 for the premium version and 97 for the standard version. Nevertheless, Klose’s statement about the four-digit number may be correct: At BAFA, the vehicle is only counted if a funding application is submitted. For 2022, Klose is even aiming for five-digit sales.

Aiways has meanwhile confirmed the restructuring of the management team (including the appointment of a new CEO) via a press release. When we reported on the new management team earlier this month, former Nio manager Zhang Yang was listed as the new CEO on the Aiways website, but the company had not announced the change in chief.

However, the focus on the domestic market speculated in Chinese media at the time is denied by Aiways. “Aiways has reaffirmed its commitment to accelerated growth and entering more markets after completing a new round of financing worth hundreds of millions of dollars,” it said. Klose was confirmed in his position as overseas chief executive and is expected to continue “spearheading the brand’s successful growth strategy in Europe and other global markets to come in 2022”.