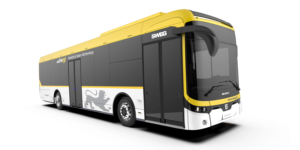 Dutch electric bus manufacturer Ebusco has received a new order from Germany. Public transport operator Südwestdeutsche Landesverkehrs-GmbH (SWEG) has ordered ten electric solo buses and ten charging units from the Dutch manufacturer. The vehicles are to be used in the federal state of Baden-Württemberg.

The order includes ten Ebusco 2.2 buses with a length of twelve metres as well as ten 100 kW chargers. The order was placed after SWEG put out a call for tenders.

The public transport company operating across southwest Germany cites the combination of competitive price, long warranty and low maintenance costs as their reason for choosing Ebusco. “After a careful process, the Ebusco low-floor buses with a large battery pack, combined with the Ebusco charging infrastructure, turned out to be the ideal solution for us,” explains Thilo Grabo, SWEG’s managing director.

The transport company has not yet revealed when the delivery is planned and where exactly the buses will be put into operation and therefore also where the 10 charging stations will be installed.

Only a few days ago Ebusco received a follow-up order from Stadtwerke München for 18-metre Ebusco 2.2 buses. Delivery is scheduled for the first half of 2023. Munich already has twelve Ebusco 2.2s in operation as solo buses in the 12-metre version, as well as two Ebusco 3.0s.

Just the month before Ebusco delivered twelve type 2.2 vehicles to Frankfurt, and Ebusco also received an order for 90 units from BVG. Delivery to the German capital is scheduled for this year. The contract includes an option to order another 60 Ebusco 2.2s until one year after delivery of the first bus.